Australia's thrashing in the second Ashes 2013 Test by England sealed the nation's worst losing streak in 30 years and was greeted with resignation by Australian media on Monday. 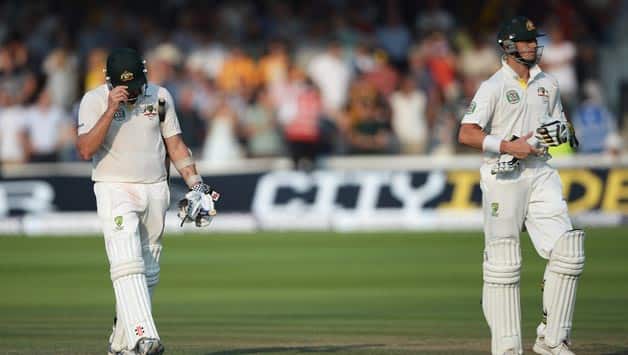 With defeat at Lord’s in the second Ashes 2013 Test, Australia have now lost six Test matches in-a-row. They have also lost the last four Ashes Tests on the trot © Getty Images

Australia‘s thrashing in the second Ashes 2013 Test by England sealed the nation’s worst losing streak in 30 years and was greeted with resignation by Australian media on Monday.

Double Ashes-holders England humiliated their arch-rivals by 347 runs at ‘the home of cricket’ Lord’s on Sunday, with over a day left, to take a 2-0 lead and strengthen their grip on the urn. Broadsheet newspaper The Australian called it: “A shabby and public humbling at Lord’s.”

In an opinion piece, the newspaper’s cricket writer Gideon Haigh said Usman Khawaja’s 54 was the only saving grace by the team’s underperforming batsmen, with the top order again failing to deliver sufficient runs.

“Otherwise, events were another stark repudiation of the prevailing Cricket Australia (CA) wisdom that fortunes can be revived simply by appointing as coach a wily old stager who tells everyone to go express themselves,” he opined.

“Mickey Arthur has complained that his dismissal as coach damaged his reputation. This Test has arguably enhanced it.”

Arthur was controversially sacked before the series began in favour of Darren Lehmann, with explosive claims of divisions within the Australian team leaked to the media ahead of the second Test. He is now suing CA for AUD 4 million, claiming his reputation has been badly damaged.

Australia was bowled out for 128 in the first innings and 235 in the second with the defeat meaning that following a 4-0 rout in India earlier this year they have lost six Tests in a row for the first time since 1984. Australia has only once bounced back from a two-nil deficit to win a five-Test Ashes series — in 1936-37 when Donald Bradman plundered 810 runs in the series.

“It would be an astonishing feat for this Australian team, which has now lost six Tests in a row, to emulate such an achievement, given the depths to which it has sunk,” the Sydney Morning Herald’s cricket writer Chloe Saltau wrote.

“Australia has 11 days to regroup in mind and body before the third Test at Old Trafford. But the gulf in class is greater than anyone imagined when the Australians embarked on this Ashes tour.”

The Sydney Daily Telegraph said there appeared to be little hope on the horizon. “Right now there appear few solutions on how Australia can drag itself back into the series to prevent a 5-0 whitewash,” the newspaper said.

“One of the biggest concerns has to be Shane Watson. For the third time in four innings this series he was caught plumb in front, plodding his front leg straight down the pitch to Jimmy Anderson.”

Watson’s dismissal for 20 was his 10th leg before in 18 innings against England.

Captain Michael Clarke remained confident Australia can bounce back, but admitted to the Australian Broadcasting Corporation that their top-order batting failures were unacceptable.

“It doesn’t matter who you play against, if you’re all out for 125 on a very good batting wicket in your first innings, you’re not going to win too many Test matches,” he said.