Australia's newspapers on Saturday ripped into their team's feeble batting in the second Test against England, fearing the Ashes campaign might have unravelled in one catastrophic session at Lord's. 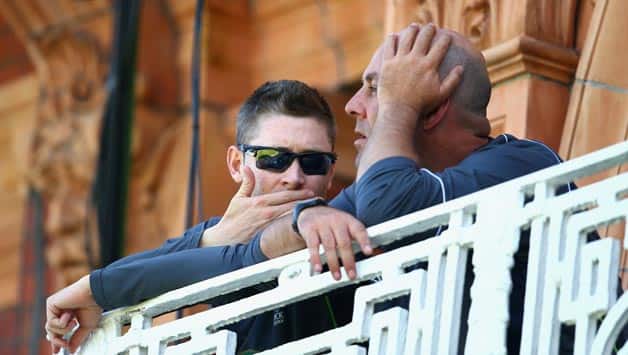 After the collapse for 128 runs in the first innings, Michael Clarke (left) and Darren Lehmann surely have a lot of work to do © Getty Images

Australia’s newspapers on Saturday ripped into their team’s feeble batting in the second Test against England, fearing the Ashes campaign might have unravelled in one catastrophic session at Lord’s.

Australia collapsed to 128 all out in reply to England’s first innings 361 with the home side opting against enforcing the follow-on and reaching 31 for three in their second innings by stumps for an overall lead of 264.

Ashes holders England are already 1-0 up in the five-match series after last week’s 14-run win at Trent Bridge. “What a mess, what a shambles, what a debacle, what an embarrassment,” thundered the Daily Telegraph’s Malcolm Conn.

“Some of Australia’s most well-paid professional sportsmen have been responsible for amateur-hour. There can’t have been few more mindless batting performances than Australia’s appalling 128 during the second day at Lord’s.” Conn added: “Australia’s feeble collapse had nothing to do with outside distractions from [sacked coach] Mickey Arthur or anyone else, it was just simple ineptitude.

“The players have no one to blame but themselves. Cricket Australia spends millions pampering and preparing its players with a support staff almost the size of a cricket team.”

Fairfax Media feared the Ashes could be over for Australia and said it was one of several recent woeful top-order batting performances. “Australia’s Ashes campaign might have unravelled in one catastrophic session at Lord’s,” Chloe Saltau wrote. “Awful batting contributed to the touring team being levelled for 128, Australia’s lowest total at Lord’s since 1968.”

Fairfax columnist Malcolm Knox took it a step further. “The British department of health has announced that the current heat wave has contributed to more than 700 fatalities. Australian batting was not listed among them, but the Ashes, as a contest, headed into the weekend on a morphine drip,” Knox said.

“A batting collapse such as Australia’s on Friday was one of the few things about this series that was anticipated. Its precedents go back not just to India, but reach deep into the [Ricky] Ponting years.

“The roll call reads like the carved frieze in a war memorial. Perth, 2012. Hobart, 2011. Cape Town, 2011. Melbourne, 2010. Headingley, 2010. They go back to the one that most resembles this, which was at the Oval Test match in the Ashes series of 2009, when the entire rubber was decided between lunch and tea on the second day.”

The Australian’s Wayne Smith described it as one of the most dismal days of Ashes cricket in living memory, with coach Darren Lehmann “giving a tongue-lashing to Australia’s miserably underperforming batsmen”.

The Australian’s cricket columnist Gideon Haigh singled out opener Shane Watson for particular criticism.
“At Lord’s yesterday, a cricket experiment continued: the effort to turn Shane Watson into a Test batsman, now into its 43rd attempt,” he wrote.