In tough conditions at Chester-le-Street, Durham, Chris Rogers has soldiered on to take Australia to 148 for four at Tea on Day Two of the fourth Ashes Test. The fast-bowlers are getting help and Australia were jolted by Stuart Broad early. However, Rogers has fought hard and is rallying Australia as they aim to overhaul England’s first innings total of 238. 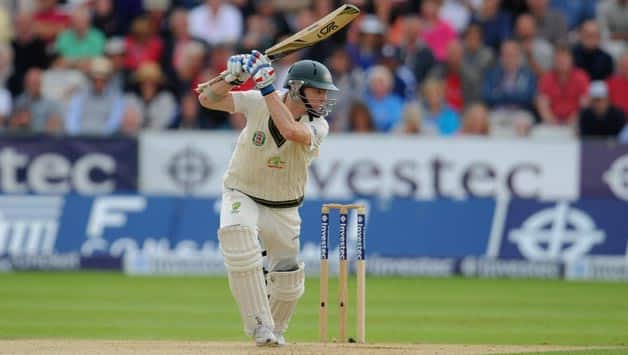 In tough conditions at Chester-le-Street, Durham, Chris Rogers has soldiered on to take Australia to 148 for four at Tea on Day Two of the fourth Ashes Test. The fast-bowlers are getting help and Australia were jolted by Stuart Broad early. However, Rogers has fought hard and is rallying Australia as they aim to overhaul England’s first innings total of 238.

Resuming after lunch at 75 for three, Australia lost Steven Smith early when he edged a Tim Bresnan delivery to the wicket-keeper. In walked Shane Watson and fought hard. He took his time and once he got his eye in, the boundaries came. One shot that stood out was a murderous pull off Anderson for four through square-leg.

Rogers had his awkward moments and got into a tangle a few times. One delivery by Broad came in even as Rogers was ready to leave it. Rogers was in the air while dealing with it and got an inside edge to third-man.

It required great concentration to last in the middle. Rogers got rewards for his hard work and had a bit of luck on his side. He got to his fifty when he edged one to first-slip. It wasn’t carrying so, Graeme Swann dived across from second-slip, but could not hold on. As Watson grew in confidence, the partnership became stronger. They took Australia past 100 and also brought up their fifty partnership. Swann wasn’t used a lot and it was surprising as Jonathan Trott came into the attack before him during the session.

Earlier in the day, Australia did not allow England to add to their overnight total. James Anderson’s woodwork was disturbed in the second over of the day by Jackson Bird. In reply, Australia were rocked by Stuart Broad, who got good shape away from the left-handers. Both David Warner and Usman Khawaja were out because of their indecision. They were unsure whether to play or leave. As a result, Warner dragged one back onto his stumps, whereas Khawaja got an inside edge into Matt Prior’s gloves.

Australia finally had the Decision Review System (DRS) go their way. England had reviewed a leg-before call, but it had pitched outside leg to Rogers. Later, in the over, there was a noise as it went past the bat and Prior pouched it safely. Tony Hill gave him out and Rogers was stunned. He consulted Michael Clarke and took the review. Hot Spot showed that there was a deflection off the back-pad and nothing on the bat. The third-umpire then checked for the leg-before and although it was pitching in line, it was merely clipping the stumps. As the original appeal was for caught behind, Rogers was given a lease of life, even as England were perplexed.

Although they lost Smith in the second session, Rogers and Watson have done well to bring some stability to the innings.