Ashes 2013: David Warner puts Australia on course in pursuit of 299 in 4th Test

Ashes 2013: David Warner puts Australia on course in pursuit of 299 in 4th Test

It has been an intriguing contest at Chester-le-Street as Australia have taken a stranglehold of the game at Tea on Day Four of the fourth Ashes Test. Chasing 299 for victory, Australia are well placed on . David Warner has been the dominant man as he has gone on to his half-century. Australia lost Chris Rogers for 49, but that was only after the opening partnership put up a hundred. 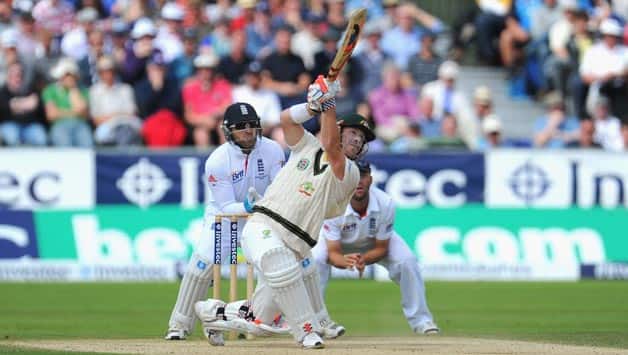 It has been an intriguing contest at Chester-le-Street as Australia have taken a stranglehold of the game at Tea on Day Four of the fourth Ashes Test. Chasing 299 for victory, Australia are well placed on 120 for one. David Warner has been the dominant man as he has gone on to his half-century. Australia lost Chris Rogers for 49, but that was only after the opening partnership put up a hundred and England have a lot of thinking to do.

The start to the afternoon session was delayed as there was rain in the air. However, once play resumed, Warner and Rogers looked largely untroubled. Warner in particular was fearless in his strokeplay and went about his job with a positive intent. Anything pitched short outside the off-stump was smashed away through the off-side. Graeme Swann was also dealt with easily as he used his feet and carted a six over extra-cover.

At the other end, Rogers had a few early scares, particularly when a catch didn’t carry to first-slip. Instead, Swann dived across from the second slip and couldn’t hold on to it. He was given out caught behind later of one delivery that left him, but reviewed it immediately. The Hot Spot confirmed that the ball had flicked the back-leg and there was nothing on the bat.

While Rogers was gritty and held firm with his defence, there was only one way Warner was approaching it. For a major part of the session they were scoring at over four runs an over and England started looking nervous.

Some of Warner’s shots that stood out were an upper cut off Stuart Broad and a nudge through the slip cordon off Bresnan as both fetched boundaries. They moved past fifty comfortably and then took their stand over a hundred. Warner also reached his fifty with a boundary.

Rogers then pulled a short-delivery off Swann for four to move to 49. However, he was caught at first-slip as England breathed a huge sigh of relief. Usman Khawaja walked out to join Warner and got some confidence with a full-toss smashed behind the bowler which fetched him four.

England resumed the day on 234 for five and Ian Bell’s ton had put them in a strong position. On Sunday, Ryan Harris was the man doing the damage and he continued his rampaging form today. Although, he ran into an in form Ian Bell and Kevin Pietersen yesterday, he was determined to make a mark. Early in the day, he got one to move back and it broke through centurion Bell’s defence. One may have felt that it may have kept a little low, but it was a wicket the Aussies were looking for.

Matt Prior walked out to join Bresnan, but he dragged the first one back onto his stumps to hand Harris a fifer. The stage was set for a hat-trick and Harris ran in to bowl to Broad — who defended it calmly. In the overs that followed, Broad and Bresnan wielded the willow to strike a few boundaries and troubled the Australian bowled. Broad thenfell as he was surprised by a short ball from Harris and was caught at gully.

The boundaries kept coming and the England tail kept wagging. Bresnan kept attacking and even smashed Bird for three fours in an over. The ninth wicket pair put up 42 before Bresnan was out for 45. Nathan Lyon finished things off when he had Anderson caught behind for naught. England were bowled out for 330, leaving Australia with 299 to win.

The opening partnership has given Australia tremendous hope, but this Test match has seen the other side get back into the game. Australia need another 179 to win the game.

Ashes 2013: Graham Onions in doubt for 5th Test due to broken finger