Australia's David Warner insists he is relishing the jeers of the Old Trafford crowd that have accompanied his return to Test cricket. 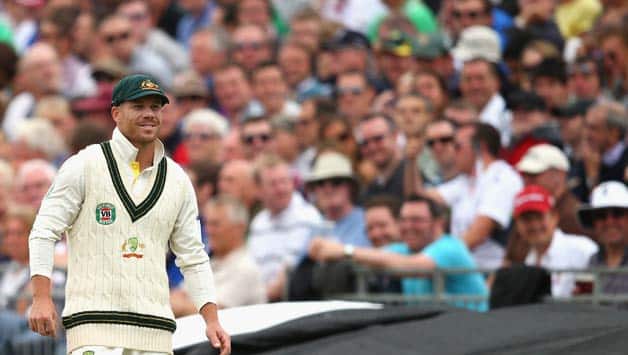 Australia’s David Warner insists he is relishing the jeers of the Old Trafford crowd that have accompanied his return to Test cricket.

Warner was recalled for the ongoing third Ashes Test against England after missing the first two matches, having being banned from the warm-up games for punching England’s Joe Root in a Birmingham bar following a Champions Trophy defeat by Australia’s arch-rivals in June.

It was the latest in a series of off-field incidents that have threatened to derail the left-handed batsman’s career, including a Twitter spat with two leading Australian cricket reporters and a sledging row when he made 193 for Australia A against South Africa A in Pretoria last month.

“The interaction with the crowd has been fantastic, I just have to smile and take it,” Warner said. “Hopefully I can turn them round.”

Warner made 41 on Sunday before, as if pre-ordained, he was caught by Root after hooking Tim Bresnan.
“Yeah, hooked another one to Rooty. Out of all the people in the field, it was quite comical. I’ll probably read it on Twitter a bit later.”

“I’m copping a little bit on the [boundary] fence but you’ve just got to keep smiling, enjoy the crowd and embrace it.

“The crowd have been very vocal — they’ve been a bit quiet in the morning though, probably hung over from the day before.”

Meanwhile Billy Cooper, the trumpet-player of England’s Barmy Army supporters group, added to Warner’s status as the pantomime villain by playing the theme tune from the boxing movie Rocky when the Australian was on the field.

“I actually liked the trumpeter playing the Rocky theme song. It was actually entertaining for myself. I had a little chuckle.”

“It’s not every day you walk out on the field and get booed,” explained Warner, who also said he’d spoken to Root.

“Yeah, Joey. He said to me, ‘It’s been a long couple of months hasn’t it?’ and I just turned around and had a little smile.”

“I’ve got a long memory, so it’s alright,” a laughing Warner said.

However, the 26-year-old Warner insisted he was utterly serious about reviving his Test career and helping Australia end a run of six straight defeats — their worst since 1984 — with victory at Old Trafford where they ended the fourth day on 172 for seven, a lead of 331 runs.

“I just want to get a win on the board for Australia. We’ve lost six in a row now and hopefully we can start that off tomorrow (Monday) and win the series 3-2.”

“I wouldn’t say I’m lucky to be playing in this series. I know what I did was a terrible thing. I had to learn my lessons and I’ve gone away and scored runs and now I’m back here and playing in the third Test.”

There was controversy not of Warner’s making at Old Trafford on Sunday when the umpires halted play for bad light, despite the floodlights being switched on, even though Australia captain Michael Clarke, who was batting at the time, wanted to stay out in the middle.

England, 2-0 up with three to play, only need a draw in this match to retain the Ashes and a stoppage was far more beneficial to them than Australia.

Prior to the bad light, England had been bowling their overs slowly and Warner said home captain Alastair Cook was risking a ban for time-wasting by the International Cricket Council.

“We knew the bowlers were going to take their time. The decisions they reviewed off me were a massive time-waster.”

“The captain suffers from that. He’ll miss a game if he’s time-wasting or if the overs aren’t bowled in the time allocated. That will come back to bite them (England) on the bum.”