England batsman Kevin Pietersen remains available for next week's final Ashes Test despite undergoing a scan on his troublesome right knee on Wednesday, the England and Wales Cricket Board said in a statement. 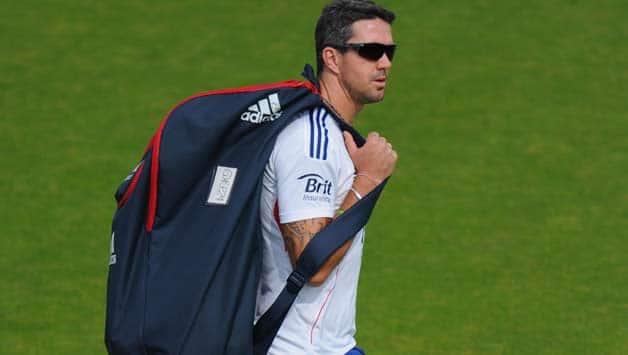 England batsman Kevin Pietersen remains available for next week’s final Ashes Test despite undergoing a scan on his troublesome right knee on Wednesday, the England and Wales Cricket Board (ECB) said in a statement.

Pietersen’s prospects of playing in the fifth Test, which will take place at The Oval, his Surrey home ground, were called into question when it emerged he was having a scan on his knee.

However, an ECB statement said it was a routine part of his recovery from an injury suffered earlier this year.

“Kevin Pietersen had a precautionary scan on his right knee today [Wednesday] as part of an ongoing monitoring process following the bone bruising injury that occurred in February,” said the statement.

“Kevin remains available for selection for the fifth Ashes Test and will continue to receive treatment on his right knee as part of his rehabilitation programme over the course of the remainder of the series and beyond.”

This has been a largely frustrating year for 33-year-old South Africa-born Pietersen, sidelined for several months after returning home early from England’s tour of New Zealand in March with a knee injury.

However, he has featured in all four Ashes matches, helping England retain the urn and win the series at 3-0 up, despite also suffering a calf problem in a mammoth 347-run win over Australia in the second Test at Lord’s.

Pietersen made 113 as England avoided the follow-on in the drawn third Test at Manchester’s Old Trafford and in the hosts 74-run fourth Test win at Chester-le-Street contributed an important second innings 44 in partnership with century-maker Ian Bell.

Former England captain Pietersen is arguably the team’s most talented batsman but, with the Ashes won, coach Andy Flower won’t want to take any undue risks with one of his key players.

Prior to Wednesday’s statement, Flower had already made it clear Pietersen would not be released for Surrey’s appearance in English county cricket’s Twenty20 finals day at Edgbaston on Saturday.

It was a decision accepted by Surrey caretaker coach Alec Stewart, himself a former England captain and wicketkeeper-batsman.

“There are no problems at all and we fully understand,” Stewart told Sky Sports News.

“It wouldn’t be right for Kev to play in T20 finals day — we accept that. “Hopefully his knee is right for the Test next week.”

England, bidding to win four matches in a home Ashes series for the first time, are due to name their fifth Test squad on Saturday, with the game itself starting on Wednesday, August 21.

Ahead of the Old Trafford match, Nottinghamshire’s James Taylor was added to the squad as cover for Pietersen just hours before making a century against Australia while ‘guesting’ for Sussex in a tour match.

His stunning 158 in the final match of the 2005 Ashes sealed a draw that saw England regain the urn after it had been in Australia’s possession for 16 years.