Retired English cricketer and double Ashes-winning captain Andrew Strauss believes that England's team is superior but it should not "descend" to the level of the Australian team in order to ensure success in the Ashes series. 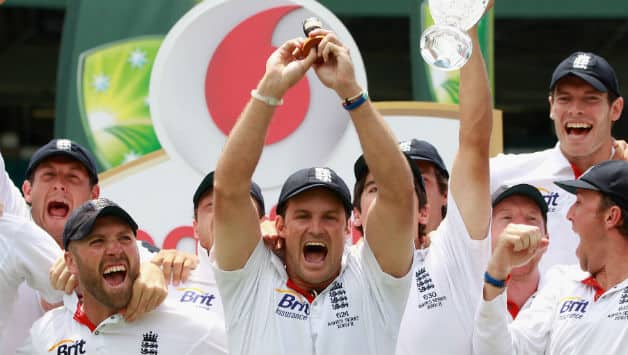 Retired English cricketer and double Ashes-winning captain Andrew Strauss believes that England‘s team is superior but it should not “descend” to the level of the Australian team in order to ensure success in the Ashes series.

Strauss has cautioned the England team, which is preparing for its third consecutive Ashes triumph, about the dangers of disciplinary and team harmony issues adding that a team cannot win the Ashes series with one or two good players but with all 11 players.

“Every Ashes series I’ve played it’s the team that gets the most out of all 11 players that wins. You can’t win an Ashes series with one or two good players, there’s too much cricket for that,” said Strauss as reported by Sydney Morning Herald.

“On paper, England appear a lot stronger. Australia have some promising seam bowlers who will threaten England in the right conditions but their batting looks vulnerable and inexperienced in our conditions.

“A few look like they’ve got technical issues and, as we saw in India, are vulnerable against quality spin, which England have [in the form of Graeme Swann, Monty Panesar and James Tredwell].

“They’ve had to deal with a lot of off-field issues. The noises you hear suggest a lot of people aren’t happy. Maybe it’s because they’re losing or there are character clashes. In my experience if you’re not happy you’ll be less than the sum of your parts.

“Australia can’t afford that. They need to start well. Trent Bridge [where the first Test starts on July 10] is huge because it might help their seamers more than elsewhere.”

Strauss further pointed out that it is questionable whether England is comfortable being favourites and perceived that they played best as underdogs adding that the mindset of the team players need to be that of a dominant nature and not descending to the level of the rival team, the report added.

“You have to also consider whether England are comfortable being favourites. I always felt we played our best as underdogs,” Strauss added.

“They have got to get better with dealing with the favourites tag but it is still a bit foreign to English sportsmen. Their mindset needs to be, ‘we are going to dominate from ball one and if you can’t live with us we’re going to pulverise you.’ The last thing you want to do is descend to the level of the team you’re playing against.”