England pacer Stuart Broad said that it was important for England to dismiss Chris Rogers early on Day Three in order to make a come back in the match. 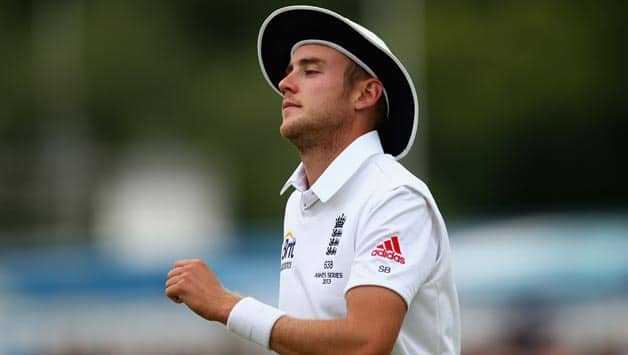 England pacer Stuart Broad said that it was important for England to dismiss Chris Rogers early on Day Three in order to make a come back in the match.

Rogers scored his maiden Test ton to help Australia reach 222 for five at the end of Day Two of the fourth Ashes Test match at Chester-le-Street on Sunday.

After bowling out England for their overnight score of 238, Australia were on the mat as Stuart broad struck three quick wickets.

Talking about his efforts with the ball, Broad said, “I certainly got the ball to talk more.”

“You’ve just got to hang in there and do your things and hit your lengths and things will happen for you,” Broad was quoted as saying by the Sydney Morning Herald.

Broad said that England will look to take advantage of the early movement on Sunday to bag early wickets.

“The ball will seam tomorrow [Sunday] morning and we can hope to get a few quick wickets in the morning.”

Broad also said that he didn’t mind being hated by the Australian fans as it is always a good sign for an English player.

“I don’t think you want Australians to love you, because it means you’re not doing very well,” Broad said.

“There’s quite a few English players from the 90s and early 2000s who’d want to be an Australian villain,” he added.

“The (fallout from not walking) is part and parcel of the media’s job, I suppose. It didn’t affect me personally, in the fact that we went on to win that Test match which helped us get a 2-0 lead in the series,” Broad concluded.