Australia great Glenn McGrath bemoaned a "horror day" for the tourists as Joe Root batted England into a position of total dominance in the second Ashes Test at Lord's. 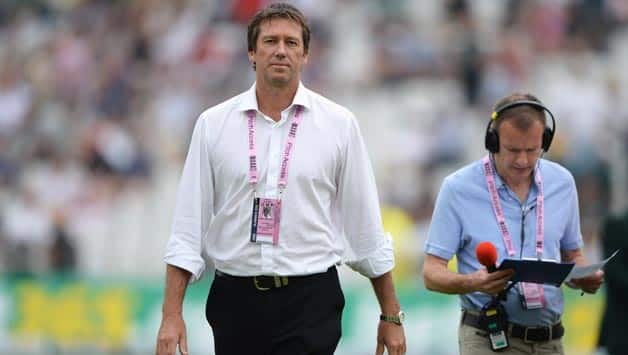 Australia great Glenn McGrath bemoaned a “horror day” for the tourists as Joe Root batted England into a position of total dominance in the second Ashes Test at Lord’s.

Ashes-holders England, already 1-0 up in the five-match series after a 14-run win at Trent Bridge last week, were 333 for five at stumps on Saturday’s third day with Root 178 not out.

England now had a colossal lead of 566 with their arch-rivals already needing to make far more than the Test record fourth innings victory total of 418 for seven by the West Indies against Australia at St John’s in 2002/03 if they were somehow to square the series at 1-1.

McGrath, who retired from Test cricket in 2007 with 563 wickets to his name — the most by any fast bowler — was dismayed by what he saw at Lord’s.

“It was a horror day for Australia, it was probably even worse than Friday,” McGrath, a member of BBC Radio’s Test Match Special commentary team, said.

“England saw them off early on and then the runs starting to tick over as the day wore on.” McGrath was also bemused as to why Australia didn’t take the new ball Saturday, albeit England were 172 for four — a lead of 405 runs — when it became available after 80 overs.

“I am curious why Australia didn’t take the new ball, run in hard and have a red-hot go at England to show they won’t lie down,” McGrath, a thorn in England’s side for much of the 1990s and 2000s, said.

“It became too easy at times. Nothing shy of a miracle can save them [Australia] from here.”
Meanwhile opening great Geoffrey Boycott, also commentating for the BBC, marvelled at the audacity of 22-year-old Yorkshire and England successor Root.

“Joe Root is a modern player who has been raised on Twenty20 cricket. The reverse sweep is part of his game but players like myself and [Colin] Cowdrey didn’t even know that shot existed. It never crossed our minds to play it.”

Michael Clarke’s bold captaincy in the field has won many plaudits but Boycott criticised the Australian’s decision to bowl teenage left-arm spinner Ashton Agar and leg-spinner Steven Smith in tandem for much of Saturday’s final session.

“Ashton Agar is very ordinary,” said Boycott. “He has got talent but he’s not ready for Test cricket yet.
“Steve Smith is useful and will take wickets and score runs but to have them both bowling at the end was like going to a carvery. It was help yourself.”

Meanwhile Boycott could not resist a dig at Australia’s batsmen. “If Bangladesh had been bowled out for 128 like Australia were, people would be saying they are pathetic and shouldn’t be playing Test cricket.”