Bowling great Glenn McGrath praised the attitude of the England players after their victory in the fourth Ashes 2013 Test against Australia. The former Australian bowler said he saw a bit of Australia’s old 'Baggy Green mentality’ in the current English crop. 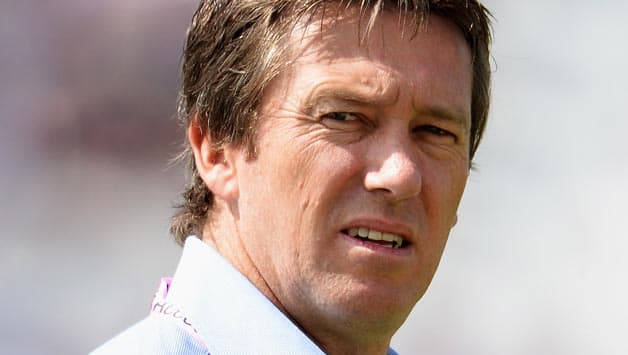 Bowling great Glenn McGrath praised the attitude of the England players after their victory in the fourth Ashes 2013 Test against Australia. The former Australian bowler said he saw a bit of Australia’s old ‘Baggy Green mentality’ in the current English crop.

England won the match at Chester-le-Street on Day Four to seal a unassailable 3-0 lead with one match remaining. At one point Australia were at 147 for one chasing 299 and looked like getting their first victory in the series.

But an inspired spell from Stuart Broad led England to a 74-run win as the Aussies lost nine wickets in less than one session.

It was Australia that won matches from losing causes during McGrath’s era and England that lost matches from winning positions. But the legend, who took 563 wickets admitted that the roles had reversed.

“The Australian team that I was lucky enough to play in had a certain aura and sometimes you had teams beaten before you walked on the field,” McGrath wrote in his column at The Guardian.

“England aren’t at that stage but after 12 Tests without defeat and five wins in six they’ve got that confidence, that belief.

“We saw something of that old Baggy Green mentality from England on Monday evening. When you’re playing in a good team where you’re confident in yourself and your team-mates, when you’ve done the business before, it makes it so much easier.

“The opposite is also true: when you’re used to losing you somehow keep finding ways to lose. Australia were right in the game with England 275 for eight in their second innings, but the last two pairs were able to add another 55 runs. When you haven’t had that experience of toughing it out for a victory you can be on top in a game, something happens and it’s ‘here we go again…’, and you end up losing another one you could have won.

“But it’s not all down to attitude. England have got some hugely talented players and the one who has really impressed me is Ian Bell. He hasn’t won a man of the match award but for me he’s been the man of the series.”

Bell is the leading run-scorer in the series on either side with exactly 500 runs at an average of 71.42. he has also scored three centuries and two half-centuries.

Only Joe Root and Kevin Pietersen have averaged above 30 for England apart from Bell. Root, keeping aside his 180 at Lord’s in the second test, has struggled throughout. Pietersen also notched up one century and one half-century.

This has led the bowlers with a lot to do. James Anderson took two five-wicket hauls in the first Test at Trent Bridge. Graeme Swann took a total of nine wickets in the second Test and Broad’s 11 wickets in the fourth Test have helped England retain the Ashes and clinch the series.

“The scary thing for Australia is that as a team England haven’t really produced a complete performance yet. It has been one or two players per Test that have done the business,” McGrath added.

“Australia will try to find the positives but you wonder where they can go from here. They’ve taken a massive blow and somehow they have to pick themselves up.”