On a difficult day for bowlers, England won the toss and posted 289 for seven on the board at stumps on Day One of the second Test against Australia at Lord’s. 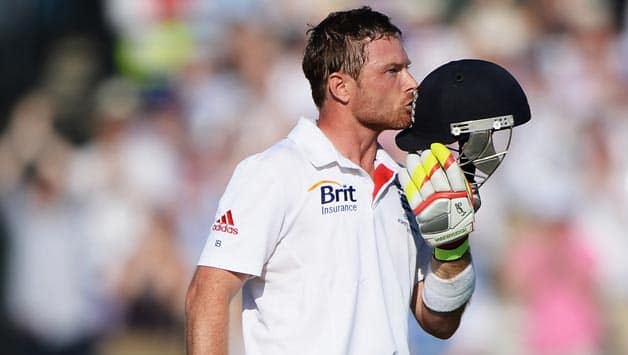 On a difficult day for bowlers, England won the toss and posted 289 for seven on the board at stumps on Day One of the second Test against Australia at Lord’s. Ian Bell scored his second consecutive 109, while Jonny Bairstow and Jonathan Trott chipped in with half-centuries of their own. England’s middle-order threatened to take the game away from Australia, before clever captaincy and some wily part-time spin got them back in.

The majority of the day belonged to Bell, who walked in with his team in a precarious position at 28 for three after a top-order collapse. The 31-year-old then stitched vital partnerships with Trott and Bairstow, and buoyed England out of trouble.

It was another visually pleasing knock from Bell, who played with extreme confidence, clearly boosted by his Trent Bridge heroics. He bombarded the cover-point region with boundaries and brought up his fifty with a cheeky slice to the fence past the diving Phil Hughes at point. He timed the ball to perfection, not needing to use any kind of aggression. After hitting 15 elegant boundaries, Bell reached his second successive ton and third in three consecutive Test matches against Australia as England entered the last hour or so of play at a healthy 271 for four.

With the 80th over and the availability of the new ball approaching, Michael Clarke decided to give his quicks a rest and brought part-time spinner Steven Smith on for one last go with the soft, old cherry. It was akin to the last throw of the dice for Clarke for the day, whose bowlers had toiled in the hot sun on a perfect batting track. But even he wouldn’t have expected what would happen over the next few overs.

In his very first over, Smith got rid of Bell with a vicious turner which went in the red zone in the host broadcaster’s ball revolutions counter, took Bell’s edge and was lapped up by Clarke in first slip. If that was a lucky break, Smith said, hold on, I’m not done yet, as he snapped up the wickets of Bairstow and Matt Prior in the space of four overs to drown England from 271 for four to 283 for seven.

It was a typical Lord’s pitch on offer to both teams Thursday morning. “This pitch is an absolute belter. It is a dry wicket,” tweeted Michael Vaughan prior to the start of play. England skipper Alastair Cook agreed and promptly elected to bat first after winning the toss, as he believed the pitch would dry up due to the heat. Michael Clarke concurred that he would have batted as well, and you would think it was advantage England before a ball was bowled.

However, the advantage was to last all of 25 deliveries for the hosts. Clarke and his former deputy, Shane Watson, aren’t considered to be the best of pals, more so after their former coach Mickey Arthur’s comments in leaked legal documents which hinted at a rift between the two. The British press had had a field day in the build up to the Test match as they looked to dig the dagger deeper into the Australian spine. However, it didn’t matter scant to Clarke as he brought Watson into the attack as the first change after just two overs of James Pattinson. Watson, back to bowling duties after a short hiatus, responded immediately as he trapped Cook in front on his second ball itself.

England’s morning was to get murkier as Ryan Harris, one of Australia’s two changes for the match, ran in and dismissed Joe Root and Kevin Pietersen in the next over to reduce the hosts to 28 for three. England had lost three wickets in the space of 11 balls. Even the Queen, who had been introduced to the two teams ahead of play, had seen enough and left the ground.

Trott and Bell then combined to steady the wobbles of the England ship and did well to negotiate the charged up Australian pace attack until lunch was taken. Clarke did not bring on his only spinner, Ashton Agar, throughout the session and preferred to attack with pace. His quicks did well and bowled a fuller line, constantly nipping it around and asking the right questions.

After lunch, Trott fell on 58 to give Harris his third wicket, after a 99-run partnership with Bell. This brought Bairstow out in the middle, who was in need of some runs under his belt. He did just that as the duo built a gritty partnership that all but took the initiative from the visitors. They put on 144 runs for the fifth wicket and looked set to take England to a huge total, before a 24-year-old part-timer spun it around.