While batting woes trouble Australia, they have received yet another jolt in the bowling line-up with pacer James Pattinson being ruled out of the Ashes due to a back injury. 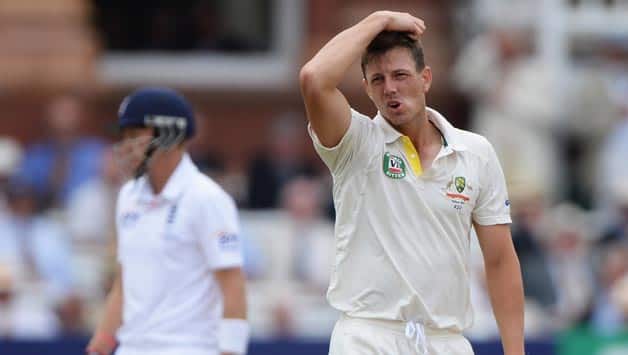 While batting woes trouble Australia, they have received yet another jolt in the bowling line-up with pacer James Pattinson being ruled out of the Ashes due to a back injury.

Sydney Morning Herald reports that the pacer has been diagnosed with a stress fracture in his lower back following the 347-run defeat at Lord’s.

“While we are obviously disappointed for James [Pattinson], the selectors have five bowlers fit and ready perform in England, providing them with many options,” team performance manager Pat Howard was quoted as saying by the newspaper.

Team doctor Peter Brukner said that the 23-year-old will have to strive to recover in time for the home Ashes series. “We had some scans done today in London that have identified an early stage low back stress fracture. Unfortunately he will not take any further part in this Test series and will commence a rehabilitation program with the aim to have him back for the Australian summer,” said Brukner.

Pattinson is not new to injuries. In fact the pacer has been through a few and the back injury comes at a time when the pacer was confident of his physical fitness. His absence will open the way for Mitchell Starc to claw back into the playing XI unless the team is considering including Jackson Bird as the third seamer.

Howard was confident that Australia have enough pace reserves to back-up for Pattinson’s absence with Pat Cummins being one of them. “It is also important to note that several players have been performing for Australia A and are available to be called up at any stage if the NSP required them. We’ve been well planned to have as many bowlers fit and available in the lead-up to this important series and while this set-back for James is disappointing, we are confident we have good fast bowling depth,” he said.