England lost one wicket, and should have lost another if not for what seemed like a third-umpiring blunder, as they reached the tea break at 171 for four, now 404 runs ahead of Australia in the second Test at Lord’s. 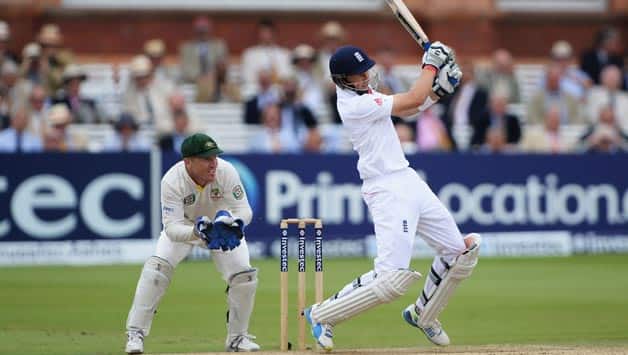 England lost one wicket, and should have lost another if not for what seemed like a third-umpiring blunder, as they reached the tea break at 171 for four, now 404 runs ahead of Australia in the second Test at Lord’s.

Night-watchman Tim Bresnan (38) was the wicket to fall, but not before a deflating 99-run stand with Joe Root (97 not out) beat the Australians into submission. Root brought up his third Test fifty in the morning as he countered Australia’s pace-bowling attack, who were gunning for an early breakthrough. Australia started the day with James Pattinson and Peter Siddle, who bowled an aggressive and consistent line to the two batsmen. Bresnan, the night-watchman, did well to stick around with Root throughout the session, something which not many would have expected.

Michael Clarke tried all five of his frontline bowlers in the morning session, but to no avail. James Pattinson finally got the breakthrough in the afternoon after Bresnan played an awkward pull straight to midwicket. This brought Ian Bell, fresh from two back-to-back centuries, to the crease. England were in no hurry, with plenty of time left in the game to set a mammoth target and bowl the opposition out. They crawled along at just about two an over and frustrated Australia.

The dagger in the chest of the tourists came when England were on 140 for four. Bell hit Ryan Harris towards gully, where Steven Smith claimed a low catch. Bell wasn’t sure, and so weren’t the two umpires. Their colleague in the television room was consulted, who after several replays concurred that the benefit of the doubt had to go to Bell. Young Smith could not believe it and had reason to be disappointed, as it did appear that he had his fingers under the ball.

Bell and Root strolled along to the second interval of the day, with the game now miles away from Australia’s reach.