Ian Bell struck his 20th Test ton to guide England to 234 for five at the end of Day Three of the fourth Ashes Test match against Australia at Chester-le-Street, Durham on Sunday. 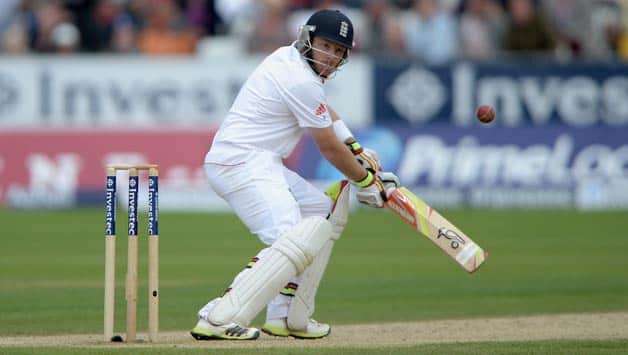 Ian Bell struck his 20th Test ton to guide England to 234 for five at the end of Day Three of the fourth Ashes Test match against Australia at Chester-le-Street, Durham on Sunday.

After bowling out Australia for 270 early in the day, England took 202 runs lead with five wickets in hand.

Chris Rogers and Brad Haddin started the day for Australia and they hoped to take the lead soon after.
However, Graeme Swann was given the ball early and he made an impact instantly. Taking a cue from Nathan Lyon, Swann came from around the wicket and it paid rich dividends. Haddin was trapped in front and the umpire gave him out. He took the review, but it was plumb in front.

Then, the centurion Rogers was dismissed due to some brilliant work by Matt Prior. Swann drew Rogers forward, but he missed it and it lobbed off the pads. Prior came from behind the stumps and dived forward to take it inches off the ground. England reviewed the umpire’s call and Hot Spot showed that Rogers got a bit of glove on it.

When England commenced their innings, the conditions were still suiting the fast bowlers. Harris then used them to his advantage and snared the English top-order. Before lunch, Joe Root was cleaned up with a beauty as it just left him and shattered the off-stump. Alastair Cook looked a lot more positive in this innings, but he went to far.