Australia scored 392 for five at lunch on Day Two of the third Ashes Test against England at Old Trafford. Michael Clarke is still going strong batting on 168. He is accompanied by wicket-keeper Brad Haddin (18 not out). Australia lost the wickets of Steven Smith (89) and David Warner (5) both falling to Graeme Swann. 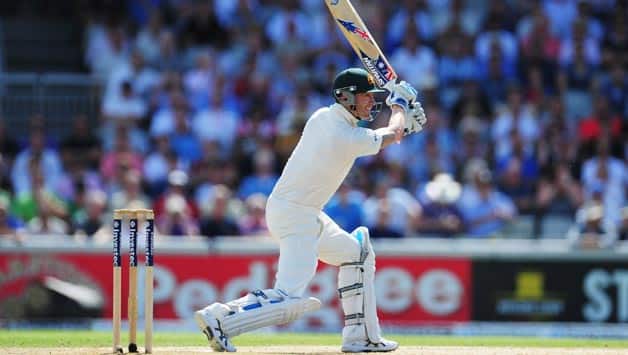 Australia scored 392 for five at lunch on Day Two of the third Ashes Test against England at Old Trafford. Michael Clarke is still going strong batting on 168. He is accompanied by wicket-keeper Brad Haddin (18 not out). Australia lost the wickets of Steven Smith (89) and David Warner (5) both falling to Graeme Swann.

England began the day bowling tight lines. Smith began the day with a confident drive off James Anderson for a four. But England were bowling an incessant line around off-stump. They kept Clarke on his overnight score of 125 for six overs. In the 97th over Clarke took a chance by flashing hard to Anderson . The ball took the thick outside edge past gully for a boundary. The next ball was hammered past cover-point for a boundary.

England had a gameplan against Clarke. On Day One they tried various strategies — leg-slip for Swann which almost worked. The short ball strategy failed to reap rewards. On Day Two England employed a short extra-cover for Clarke asking the Australian captain to go for the drive. The strategy worked. Bresnan’s full delivery was driven uppishly by Clarke but Swann at short extra-cover failed to catch the ball. Clarke continued to play expansive shots time and again. Another uppish drive went just over Anderson at mid-off for a boundary. The aggression and intent against Bresnan was visible the moment Clarke reached his 150. Clarke celebrated that achievement with a straight lofted shot over Bresnan’s head. The next ball was ferociously hit past point for another boundary.

Clarke and Smith were growing from strength to strength till the first hour of the morning session. The pair scored a record fourth wicket stand at Old Trafford and looked in total command for most part of the first session. Smith had a nervy moment when he played across the line to a full delivery from Anderson. But it was called a ‘no-ball’ since Anderson had flicked off a bail with his hand while delivering the ball. According to the new ICC regulation the on-field umpire has to call a ‘no-ball’ under such circumstances.

Smith lost his concentration after the drinks break. He lost his wicket against Graeme Swann as he tried to take the England spinner on straight away. Smith was beaten in flight and his lofted shot was a miscue which was held by Jonny Bairstow at mid-wicket. Smith missed his maiden Test century by 11 runs. The 214 run alliance from Clarke and Smith gave Australia a solid platform.

Smith’s wicket brought the crowd to life. They welcomed David Warner with a lot of boos. Warner fell for five when he edged Swann behind the wicket where the ball popped to first slip after hitting ‘keeper Matt Prior’s left pad. Warner was not convinced and called for a review. It turned out to be a wasted review since the ball had hit Warner’s bat and the bat hit the pad almost instantly.

Haddin began his innings in a positive manner slog sweeping Swann over mid-wicket for a four. He then lofted Anderson over mid-on’s head for another boundary to show his positive intent. Haddin was going for his shots. Against Anderson he went for a pull off a slightly full delivery. The ball took the bottom edge and ‘keeper Prior failed to hold on to a tough chance to his left. Despite that Haddin continued to be positive. He flicked Anderson over mid-wicket for a boundary.

Australia will be aiming to bat England out of the game as they have a solid platform going into the second session on Day Two.

Parvez Rasool should get to play in Zimbabwe, says J&K CM Omar Abdullah