Australia's preparations for the final Ashes Test against England suffered a blow.

London: Australia‘s preparations for the final Ashes Test against England suffered a blow as Northamptonshire‘s Steven Crook condemned the beleaguered tourists to another dispiriting spell in the field on Saturday. After Friday’s opening day of the three-day tour match had been washed out, Australia-born Crook’s unbeaten 142 put his fellow countrymen to the sword in Northamptonshire’s first innings total of 396 all out. Crook’s memorable day continued when Australia started their reply as he took a catch to remove David Warner for six off the bowling of Maurice Chambers, with the visitors reaching stumps on 13 for one. Northamptonshire player Ben Sanderson hit on the head by a Pat Cummins Bouncer

Australia have already surrendered the Ashes after a crushing defeat in the fourth Test that left them 3-1 down in the series with only next week’s finale at The Oval remaining. And on the evidence of a lacklustre showing at Northampton, they may struggle to avoid ending the series with another loss. Peter Siddle, Pat Cummins and Fawad Ahmed, all unused by coach Darren Lehmann in the Ashes, featured in the tourists’ bowling attack. David Warner speaks about his responsibilities as Australia vice-captain

But of that trio only Cummins, who took three for 64, found himself in the wickets. All-rounder Mitchell Marsh (four for 56) and spinner Nathan Lyon (three for 93) shared the remaining wickets. Northants openers David Murphy and Ben Duckett put on 68 for the first wicket, but the latter was lbw to Marsh moments after bringing up his half-century. Steven Smith is the right man to lead Australia, asserts Rod Marsh

Murphy was out to Lyon after making a painstaking 20, but Kyle Coetzee fired 86 before being bowled by the off-spinner to leave the hosts 212 for six. From that point Crook, a 32-year-old all-rounder from Adelaide, dominated a flagging Australia attack. He smashed 24 fours and four sixes in his 96-ball innings and sharing fifty partnerships with George Munsey, Ben Sanderson and Richard Gleeson. Steven Smith is the right man to lead Australia, asserts Rod Marsh 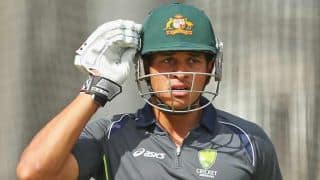