Ben Stokes labelled Australia's attempts to put him off his game as "pretty silly".

London: England all-rounder Ben Stokes labelled Australia‘s attempts to put him off his game as “pretty silly” and claimed the Cardiff Test was “revenge” for the 5-0 humiliation England suffered in the 2013-14 series in Australia. ALSO READ: Ben Stokes not trying to emulate Andrew Flintoff or Ian Botham

England’s flame-haired all-rounder has a reputation for a fiery temper after breaking a wrist punching a locker in anger and was also caught up in a war of words with West Indies‘ Marlon Samuels during England’s 1-1 series in the Caribbean in April.

“That was pretty silly, I thought. Rooty (Joe Root) said that if they’re trying to do that, they must be thinking we’re on top. So if they’re going to do that for the rest of the series then fair enough,” Stokes was quoted as saying by mailonline.co.uk on Wednesday. ALSO READ: David Warner needs to show more respect towards Joe Root, says Brendon McCullum

“Haddin picked up on my habit when we were in Australia last time. He said: ‘You’re still doing that, then?’ I said ‘Yeah’. Then Lyon and Warner thought it would be funny to stand in my way. I just said: ‘You can stand there all day because I’m not moving until you move. If you want to get your captain’s over-rate down then so be it,” he said.

Stokes scored 52 and 42 for England and took the key wicket of Adam Voges late on the second day as England romped to a 169-win in the series opener in the Welsh capital. 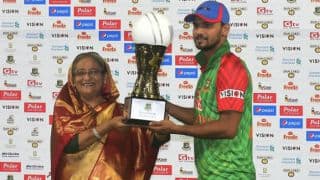