Ben Stokes wants to create a distinct identity for himself rather than emulate others.

England all-rounder Ben Stokes has said he understands why he’s been compared to Ian Botham and Andrew Flintoff but stressed he is determined to make his own mark in international cricket. Botham re-shaped the 1981 Ashes in England’s favour with both bat and ball while Flintoff was the hero of England’s 2005 success against Australia with a series of impressive all-round displays. ALSO READ: David Warner needs to show more respect towards Joe Root, says Brendon McCullum

Stokes, another big-hitting and lively pace bowling all-rounder, has been tipped to fill the Flintoff role by current England captain Alastair Cook in this season’s Ashes. But as England head into Thursday’s second Test at Lord’s on Thursday with a 1-0 lead following their emphatic 169-run win in Cardiff last weekend, the 24-year-old Stokes was clear about how he saw his England future. “I’m Ben Stokes; I’m not Flintoff, or (Ian) Botham,” he said.

“Being an all-rounder, you’re probably going to get compared to the Bothams and the Flintoffs — as I have done recently,” said the Durham man, who provided one of the rare England highlights during their 5-0 Ashes thrashing in Australia in 2013/14 with a defiant maiden Test hundred in Perth. ALSO READ: Stuart Broad is back to his best, claims Alastair Cook

“I’m not looking to emulate them. I’m just going to go about my cricket in the way I want to do it,” declared Stokes, who did exactly that by scoring the fastest Test hundred ever seen at Lord’s last month with a breathtaking century against New Zealand.

“People can say it is extra pressure, but I do not find there is any extra on me,” he said. “I am just going to go out there and try to perform. If I don’t, then there will be someone else knocking on the door trying to take my place. “So now I have got this stable position in the team, I want to keep it.” ALSO READ: Australia refused Alastair Cook’s invite for a post-match drink, claims James Anderson

For Stokes, England’s victory in Cardiff — completed with more than a day to spare — was especially sweet following their Ashes humiliation in Australia. “When Rooty (Joe Root) caught the catch at the end (in Cardiff), it was like revenge.”

New Zealand captain Brendon McCullum accused Australia’s David Warner and Nathan Lyon of “petulance” in trying to delay Stokes’s unusual habit of circling the top-end of his bat in the crease between overs although the England man simply bided his time in the end before going through with the distinctive routine. ALSO READ: Peter Nevill set to replace Brad Haddin for 2nd Ashes 2015 Test at Lord’s

“That was pretty silly, I thought, really,” said Stokes. “Rooty said that if they’re trying to do that, they must be thinking we’re on top. “So if they’re going to do that for the rest of the series then fair enough. “I just said ‘You can stand there all day because I’m not moving until you move. If you want to get your captain’s over rate down then so be it’.” 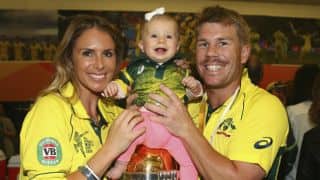