Chris Rogers rated the Lord's hundred as one of the proudest moments of his career.

Chris Rogers was a proud man after posting his highest Test score on his adopted home ground of Lord’s as Australia dominated Thursday’s opening day of the second Ashes Test against England. At stumps, Rogers was 158 not out and Steven Smith unbeaten on 129 in an Australia total of 337 for one. ALSO READ: Chris Rogers, is it really your time to retire?

This innings was all the more significant for Rogers as it came at ‘the home of cricket’ — a ground he knows well from his time spent playing and captaining Lord’s-based county side Middlesex. “It’s going to be one of the proudest moments in my career I think,” left-handed opener Rogers told Sky Sports after beating his previous Test best of 119 against England at Sydney in 2014. ALSO READ: Steven Smith’s battle to Lord’s honours board

“To score a hundred at the MCG (Melbourne Cricket Ground) then the SCG (Sydney Cricket Ground) and then to get one here, it’s so special,” added the 37-year-old, who plans to retire after the end of this series. Rogers said the way he and Smith, dropped on 50, batted was especially important after England went 1-0 up in the five-match series with a 169-run win in the first Test in Cardiff last week. MATCH REPORT: Rogers, Smith propel AUS to 337/1 at stumps on Day 1 of second Ashes Test

“I think we came into this series riding the crest of a wave and thinking we were just going to come in and take England down,” said Rogers, who made 95 in the first innings in Cardiff after missing Australia’s preceding 2-0 series win in the Caribbean with concussion. ALSO READ: Steven Smith, Chris Rogers break Ashes record for highest 2nd wicket partnership at Lord’s

“But to suffer a heavy loss like that put us back in our place and made us question ourselves a little bit,” he added. “Hopefully Steve and I have made a bit of a statement and showed our change room as much as anyone that we can get the upper hand on England.” Smith, who played under England coach Trevor Bayliss when the Australian was in charge of New South Wales, twisted the knife further by accusing home captain Alastair Cook of excessively negative field-settings.  ALSO READ: England must guard against complacency during 2nd Test at Lord’s

“I was a little bit surprised that Trevor Bayliss would allow Alastair Cook to have a deep point for as long as he did,” said Smith. “They got defensive quite quickly. I know that’s one thing we’re certainly not going to do.”

England’s lone success in Thursday’s 90 overs came when David Warner (38) holed out to James Anderson off spinner Moeen Ali. They did not bowl especially badly and Anderson, England’s all-time most successful Test bowler with 406 wickets, insisted the hosts had not given up on victory.

“There’s four days left in the game, if we win four days we win the Test match,” said Anderson. It has been suggested that groundsmen have been told to prepare deliberately flat pitches in order to neuter Australia’s pace attack.

But Rogers said Lord’s groundman Mick Hunt would not be a party to foul play. “I have a lot of faith in Mick. I’ve tried to tell him to prepare certain pitches and he’ll never do it for me,” Rogers said. “I think he’s actually prepared a good wicket because leading into the game it was pretty ordinary weather.” 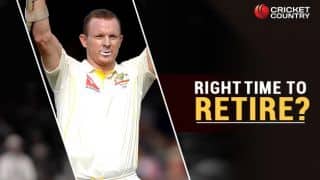 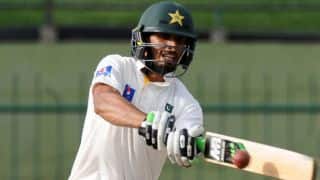