Australia crushed England by 405 runs in just four days in the 2nd Test at Lord's.

London: Australia captain Michael Clarke said he “couldn’t have asked for a better performance” after his side thrashed England by 405 runs to win the second Test at Lord’s on Sunday. Victory, achieved with more than a day to spare, saw Australia square the five-match series at 1-1. This was the fourth largest winning margin, in terms of runs, by either side in 138 years of Anglo-Australian Test cricket and came just a week after Clarke’s men lost the series opener in Cardiff by 169 runs — another match that ended inside four days. At Lord’s, Australia were on top right from the start, compiling a first-innings total of 566 for eight declared featuring personal Test-best scores of 215 from Steven Smith and 173 by opener Chris Rogers.

Then, having set England a mammoth 509 to win shortly before lunch on Sunday’s fourth day, Australia skittled out their arch-rivals for a meagre 103 in just 37 overs.

“I couldn’t have asked for a better performance,” said Clarke, looking to lead Australia to a first Ashes series win in Britain in 14 years. The intent from our batsmen through the second innings was great and the execution from the bowlers was spot on,” added Clarke, hoping to emulate Mark Taylor – the last Australia captain to win the Ashes from 1-0 down during the 1997 series in England.

Fast bowler Mitchell Johnson, who took three for 27 as the head of a hostile pace attack, said: “To end the game like that was unbelievable. The first Test woke us up a bit and seeing more bounce here fired us up.”

Meanwhile Smith, whose unorthodox technique was questioned by the likes of former England spinner Graeme Swann, added: “My partnership with Chris Rogers (they added 284 for the second wicket in the first innings) put us into a good position and we kicked on from there.”

For the third Test series in a row this year, as happened away to the West Indies and at home to New Zealand, England had been pegged back after going 1-0 up.

Even more worryingly, Sunday’s slump to 42 for three was the seventh time in their last 13 Test innings that England had been three wickets down for 43 or under.

“Hats off to Australia for the way they bounced back,” said England captain Alastair Cook out for 11 on Sunday after a gritty 96 in England’s first innings 312.

“They put us under a lot of pressure all game and we weren’t able to deal with it. Over the last few games, we have been three down for 40-odd and that is an area of concern.”

The only real setback for Australia on a day of total dominance was when Rogers retired hurt on 49 not out just two overs into Sunday’s play after suffering a dizzy spell.

He didn’t feature again in the match, with the 37-year-old — who plans to retire at the end of this series — having missed Australia’s recent series in the West Indies after suffering concussion while batting in the nets.

Rogers was also struck on the side of the helmet, by James Anderson, while batting in the first innings at Lord’s.

Australia, who have a three-day tour match against Derbyshire starting Thursday ahead of the third Test at Edgbaston on July 29, do have another opener in their squad in Shaun Marsh, who deputised for Rogers in the Caribbean.

“He probably thinks we cost him a hundred today.” 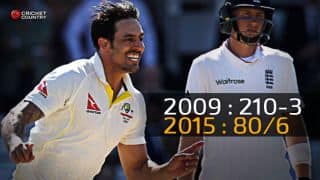 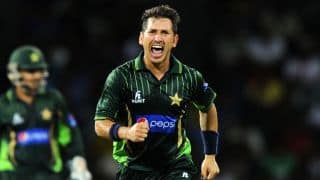