Darren Lehmann on Sunday conceded that they made a major selection blunder.

Nottingham: Claiming that his team was more competitive on the Ashes tour to England two years ago, Australia cricket chief coach Darren Lehmann on Sunday conceded that they made a major selection blunder going into the crucial fourth cricket Test at Trent Bridge. Australia surrendered the Ashes with a thumping loss by an innings and 78 runs at Trent Bridge just 39 minutes into the Test’s third day for their fourth consecutive Ashes series loss in England. They trail 1-3 with the fifth and final match scheduled to start on August 20. Australia had lost the 2013 series 0-3. Following the loss, captain Michael Clarke declared that he will retire after the fifth Test match and Lehmann admitted that the change in selection policy went against their historic view that a bowling all-rounder was crucial to team balance.

“We wanted the extra batter and spoke to the captain about it in this particular game. But we’ve always [previously] wanted five bowlers, so we probably got that selection wrong,” Lehmann was quoted as saying by cricket.com.au.

“[I am] happy to admit when we’re wrong, you don’t get everything right. We’re really strong on having five bowlers and we didn’t do that this game. In the end it didn’t matter, we only bowled once and we didn’t bat well enough.” POLL: Should Adam Lyth play in the 5th Ashes 2015 match at The Oval?

“As a coach and as selectors, we’ve got things wrong at certain times there’s no doubt about that. We’ve got to own up like players have to and everyone else that our performances weren’t good enough, full stop.”

However, he said his wards played better than what they did in 2013.

“I think we played better (in England) in 2013 to be perfectly honest,” Lehmann said, reflecting on his third Test series loss since taking over from the sacked Mickey Arthur weeks before that campaign began. Darren Lehmann not in danger of being sacked, says James Sutherland

“We certainly didn’t cope with the swinging or seaming ball in the last two Test matches well enough and that’s something we have to get better at. But we got out-skilled by a very good cricket team in England.”

Lehmann also acknowledged that naming a squad more than three months before the first Test was one of them. The 45-year-old pointed out that the decision to announce the touring party for the two-Test series in the Caribbean in June at the same time as the Ashes squad — on March 31 — was taken by the Cricket Australia (CA).

The 16 players who went to the West Indies were supplemented by pace bowler Ryan Harris for the Ashes series, to which the Australians travelled direct from the Caribbean. But problems arose early for the selectors with Harris forced into retirement before playing a Test due to the recurrence of his chronic knee injury. Ricky Ponting backs Michael Clarke’s decision to retire after Ashes 2015

And veterans Brad Haddin and Shane Watson both struggled for runs and opportunities in one-sided Tests in the Caribbean and were therefore dispensed with early in the Ashes when they were unable to turn around their form.

Lehmann said he understood the logistical requirements of choosing a squad for such a lengthy overseas assignment and the benefits of having a continuity of personnel on each tour. But in hindsight it had left them effectively short on selection options as players fell by the wayside in this tour.

“We’ve had that discussion as a selection panel and that was a tough one for us. End of the day, we were guided a bit by above [Cricket Australia] and how we wanted to move around from the West Indies to England,” Lehmann said. Darren Lehmann faces flak on Twitter for asking people to accompany him football match

“Logistics and other things come into it that are way above my head. But if we had our time again we’d probably like to pick separate squads and then see what comes from the West Indies tour leading into an England tour.”

Lehmann confirmed that the Australia team for the dead-rubber fifth Test would be selected from the 17-man squad currently in England. Darren Lehmann says Rod Marsh and him must shoulder lot of blame for Australia’s loss 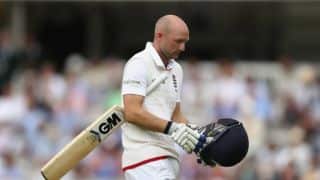 POLL: Should Adam Lyth play in the 5th Ashes 2015 match at The Oval?