England have already altered their batting line-up once this series.

Nottingham: England selector Mick Newell has defended the ongoing inclusion of struggling opener Adam Lyth in the Test side facing Australia in the Ashes series. Yorkshire batsman Lyth has failed to make a major impression on the series so far with 72 runs in six innings at an average of 12 and a best of 37, although he did score a Test century against New Zealand earlier this season. England head to Nottingham’s Trent Bridge, where the fourth Test starts on Thursday, with a 2-1 lead in the five-match series after an eight-wicket win completed inside three days across the Midlands at Birmingham’s Edgbaston ground. READ: England need to look beyond Adam Lyth before it is too late

England have already altered their batting line-up once this series, bringing in Jonny Bairstow and promoting Ian Bell and Joe Root up a place after dropping number three Gary Ballance — a Yorkshire colleague of Lyth, Root and Bairstow. Lyth’s form prompted speculation that England might give a Test debut to limited overs international opener Alex Hales on his Nottinghamshire home ground. But Newell, Nottinghamshire’s director of cricket, said Hales had still to “push his case”. “Adam Lyth has everyone’s confidence to come out here on Thursday and score runs for England,” Newell told Sky Sports on Monday.

“He has justified his place in the team and scored an awful lot of runs for Yorkshire to get into this team and he has a Test match century under his belt, so he has everyone’s confidence. It’s up to players like Alex Hales and others to push their cases in the county games.” 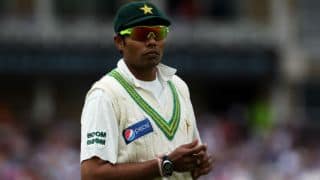