England thrashed Australia by 169 runs to go 1-0 up in the series.

England captain Alastair Cook said his new-look team had proved they “could compete with Australia” after they wrapped up a convincing win in the first Ashes Test with more than a day to spare. Saturday’s 169-run success in Cardiff saw Cook’s men go 1-0 up in the five-match series and was an ideal way for England to mark their first match under new Australian coach Trevor Bayliss. READ: England thrash Australia by 169 runs in Ashes 2015 1st Test at Cardiff

Australia, set what would have been a new Ashes fourth-innings record winning total of 412, were dismissed for 242 just over an hour after tea on the fourth day. England paceman Stuart Broad produced the latest of several decisive Ashes hauls in taking three for 39 on Saturday after man-of-the-match Joe Root had got the hosts going with 134 in a first-innings total of 430.

Cook could scarcely have wished for a better all-round effort than the one England produced in Cardiff. “It’s really important for this group of players to show that we can compete with Australia,” Cook said.

Although it is 14 years since Australia won an Ashes series in Britain, there had been speculation they would have a mental edge over England following a 5-0 whitewashing of Cook’s then side during the previous Test contest between the two sides ‘Down Under’ in 2013/14. However, England’s team in Cardiff featured four Ashes debutants in opener Adam Lyth, wicket-keeper Jos Buttler, off-spinner Moeen Ali and fast bowler Mark Wood. READ: Ashes 2015: Joe Root feels he scored his most important hundred in Cardiff

“I remember sitting here before the Test match and everyone was talking about what happened in the previous series,” Cook said. “I was getting a little bit frustrated because there’s nothing we can do about that, but as a group of players to start this series well was important,” he added.

“It shows that if we do the basics well and play with the right kind of attitude we can put Australia under pressure,” Cook, England’s all-time leading Test run-scorer added. READ: Ashes 2015: Michael Clarke wants Australia to comeback like they did in ICC Cricket World Cup 2015

It’s not going to work every time, and I’m sure the Australians will bounce back at certain times but if we can go out there are show off our talent then we’re a dangerous side,”  said the England captain.

Root, dropped second ball on nought in his first-innings ton by Australia wicket-keeper Brad Haddin, had an all-round match to remember. As well as his century, he also made an important 60 in England’s second innings 289 and on Saturday the 24-year-old Yorkshireman took two wickets with his occasional off-spin before holding the match-clinching catch to dismiss Josh Hazlewood. READ: Ashes 2015: Australia needs serious introspection after humiliating defeat to England in 1st Test at Cardiff

“I think it was my most important hundred,” said Root of his seventh century in just 28 Tests.

The teams now have a short turnaround before Thursday’s start of the second Test at Lord’s and Root added: “It’s great to get that win and hopefully we can now back it up in the next game.

“First up in an Ashes series you want to make sure you put a marker down and we really wanted to get off to a good start. But we weren’t surprised by it at all. We know we’re capable of beating Australia because we’ve got talented players,” added. Root. READ: The Ashes 2015: Where was the intensity at Cardiff? 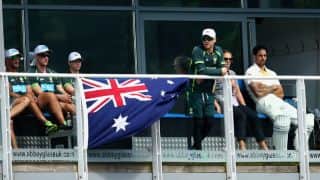