Root made a fine 166-ball 134 on the opening day to rescue England from a perilous position.

Joe Root‘s stellar run of form since being dropped for the final Test of England‘s 2013-14 rout in Australia continued with a fine hundred on the first day of the Ashes opener in Cardiff on Wednesday.

The 24-year-old Yorkshireman made 134 after coming in with England struggling at 43 for three.

By stumps, England had recovered to 343 for seven.

After being axed for the Sydney climax of the last Ashes series in January 2014 — a match England lost as Australia sealed a 5-0 whitewash — Root has enjoyed a superb run with the bat. ALSO READ: England wasting Joe Root at No.5

This was his fifth hundred in 13 Tests since then, with Root having scored 1,452 runs at an average of over 85 following his recall.

However, Root might have been out for a second-ball duck on Wednesday only for diving wicket-keeper Brad Haddin to drop a one-handed chance off fast bowler Mitchell Starc. ALSO READ: Australia must learn to thrive on flat decks

England’s new Australian coach Trevor Bayliss had said prior to this match that the side needed to “fight fire with fire” if they were to regain the Ashes and Root put the theory into action with a century that came off just 118 balls.

“When you come into positions like that, after losing three wickets quite quickly, you’re going to get opportunities to score — because they’re going to have aggressive fields,” Root told reporters.

“It could have gone completely the other way, and I could have got out second ball … then you look a little bit silly,” added Root, eventually caught in the slips off left-arm fast bowler Starc.

“But I had that fortune today, and made the most of it.

“There will be times when it doesn’t quite come off, and you look slightly stupid and play what looks like a horrendous shot and get out.

“But those are the sort of risks we’re taking by playing this attacking cricket.

“We want to continue to do that and really put sides under pressure whenever we can.”

Root received excellent support in a fourth-wicket stand of 153 from Zimbabwe-born Yorkshire team-mate Gary Ballance, who made 61.

“That was so important for us today – the mental strength he showed, the determination and Yorkshire grit,” said Root.

Australia paceman Josh Hazlewood, who marked his Ashes debut with three for 70, including the wicket of opener Adam Lyth in his first over, said the Ashes-holders had let England off the hook.

“Conditions suited us in the first hour and we probably made the most of it but we didn’t stick to our guns in the next couple of sessions,” Hazlewood said.

“We leaked runs and the pressure went away.”

As for Root, fellow 24-year-old Hazlewood said: “The way he batted today was pretty special.

“He really waited for the bad ball throughout the whole innings. He’s a most improved player from last time we played against him.

“We’ll have to work a way to get him out,” Hazlewood added.

Root, for his part, was delighted by the way in which he had responded to being dropped.

“It is a feeling I don’t want to ever go through again.

“In this sport, you have to deal with hard times and show a lot of self-belief and self-confidence to overcome those.

“The most important thing is we want to win back the Ashes.” Australia to host India for 5 ODIs, 3 T20Is in January next year 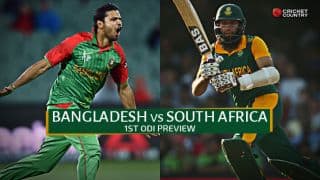