Root was punched by David Warner at a bar in Birmingham two years ago.

London: England‘s Joe Root has labelled David Warner‘s reason for hitting him two years ago as “ridiculous” after the Australia batsman explained his actions just days before the start of this year’s Ashes series.

Warner made unwanted headlines in June 2013 following what the England and Wales Cricket Board (ECB) described as an “unprovoked physical attack” on Yorkshire batsman Root after England’s 48-run win over Australia in the One-Day International (ODI) Champions Trophy tournament at Birmingham’s Edgbaston ground. READ: David Warner looks back at his infamous ‘punch’

Warner apologised but Cricket Australia (CA) still banned him for the first two Tests of an Ashes series that England eventually won 3-0.

In an interview published in Saturday’s Sydney Morning Herald, Warner suggested Root was drunk, having said his own behaviour was fuelled by alcohol, and that England fast bowler Steven Finn was “asleep in the gutter” when he left Birmingham’s Walkabout Bar. READ: David Warner: Sledging creates excitement among viewers

Warner said that while there were “little things that were going on throughout the night” which annoyed him, what sparked the incident was when Root took a green and gold wig off the head of a friend of the Australia opener and placed it under his chin — a gesture Warner interpreted as mocking South Africa batsman Hashim Amla.

“A mate of mine was actually wearing it on top of his head like a (Lasith) Malinga wig, that’s what it was,” Warner, 28, said.

“He was wearing it on his head and (Root) decided to come in and take it off my mate’s head and start acting the way he did.

“When people are drunk that’s what they do but I thought it was a bit inappropriate the way he went about that stuff so I went over and tried to take it off him. READ: Australia’s aggression might cost them the Ashes, says Michael Vaughan

“I just think in today’s society you shouldn’t be fooling around with that kind of stuff. And he probably didn’t mean anything by it at all but I just thought … actually I can’t say I thought … I probably let my aggression and alcohol take over there and probably made an excuse for me to go over there and actually take it off him,” Warner added.

Warner then struck Root and was dragged away by a team-mate before returning to Australia’s nearby hotel.

Root, set to face Warner when England play Australia in the first Test in Cardiff starting on Wednesday, was unimpressed by the Australian’s words and made his feelings clear in Twitter posts later Saturday.  READ:  Ryan Harris retires from all forms of cricket

“Disappointing to have my character questioned — those who know me realise how ridiculous Warner’s excuse for hitting me sounds but that’s his choice to try and justify his actions,” Root, 24, said.

“I’m just extremely excited about next week and getting back out there.”

Warner, who could also be up against Finn in Cardiff, said the incident had been blown out of proportion.

“I texted Joe the next morning and everything was fine,” he told the Sydney Morning Herald. “I think the way it’s been blown up I should have asked him to get in the ring for a rematch or something.” 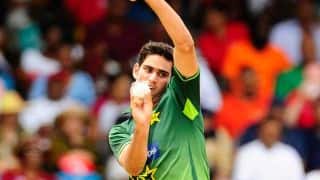 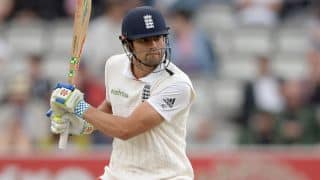