Mark Wood has prepared himself for the prospect of being sidelined.

London: Mark Wood has prepared himself for the prospect of being sidelined for the fifth and final Test against Australia despite taking the wicket that clinched the Ashes. When Durham fast bowler Wood had Nathan Lyon playing on at Trent Bridge, it sealed an innings and 78-run win in the fourth Test that gave England an unbeatable 3-1 lead in the five-match Ashes series. However, he may not be in the XI at The Oval if England spearhead James Anderson returns to the team. England’s all-time leading wicket-taker missed the fourth Test with a side strain suffered during his team’s eight-wicket win in the third Test at Edgbaston

Anderson bowled in practice on Monday and Wood, speaking to reporters at The Oval before England trained on Tuesday, said: “Jimmy’s got 400 Test wickets, he’s England’s lead bowler…I’m sure everyone would want him in the side so if he’s fit and ready to go then it looks like he would get the nod, but I’ll prepare like I have for every other game.” England football manager Roy Hodgson drops by at The Oval ahead of 5th Test

Wood has long struggled with an ankle problem and missed the match at Edgbaston after the injury raised fresh doubts about his ability to bowl at his best in back-to-back matches. “I don’t want to miss games for England. I’ve had that many injuries so far in my short career that I never want that chance to be thrown out of the team,” said the 25-year-old, who made his Test debut against New Zealand in May.

“Long term, the ankle problem may need some work done to it – whether that’s time off or maybe an operation. My style of bowling off a short run and explosive at the crease probably doesn’t help my body at times. I heard Glenn McGrath mention that my short run puts more pressure on, but I don’t know any different to be honest.” Australia and England unite for team photo

“I’ve spoken to the physios about my ankle. If it’s just the case of pain then I could probably get through but if it’s hampering my performance or I’m not bowling with a straight leg and not up to late 80s/90mph then it’s not helping anyone, then I would look to get something done about it.”

Meanwhile Wood was still savouring the experience of sealing an Ashes series win. “To get a the chance to watch it back was pretty special and I don’t want to forget that moment ever,” he said. England have never won four Tests in a home Ashes series and Wood said skipper Alastair Cook, whose side suffered a 5-0 thrashing in Australia in 2013/14, was determined there would be no let up at The Oval. Stuart Broad aims to get Michael Clarke’s wicket in his final Test at Oval

“Cooky rang me the next day [after Trent Bridge]. He didn’t let that winning feeling sink in too much because every other phone call was saying ‘brilliant, well done but let’s make this 4-1’. If it was the other way around I’m sure that Australia wouldn’t give us an easy ride so of course the celebrations will be after the game. Four-one would make it just that bit more sweet.”

The fifth Test will be Australia captain Michael Clarke‘s last before international retirement and Wood said the star batsman would receive a respectful send off from England. “He’s a fantastic player, someone who has done a huge amount for Australian cricket. Before the series he was someone I looked up to as a fan of the game, this series I’ve been up against and have had to try and get him out and that will be the same this game. There’ll be that respect there, because he’s had a fantastic career,” said Wood. Alastair Cook urges England to pile more misery for Australia in final Test 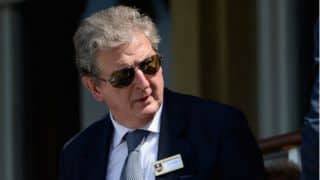