Australia reached 287 for three on Day One of fifth Ashes Test at stumps.

Mark Wood rubbished the suggestions that England who already have won the 2015 Ashes took the Day One of the fifth and final Test at Oval lightly thereby allowing the visitors to dominate with the bat as they reached 287 for three at stumps. The hosts, who defeated the Australians inside three days in the previous two matches taking an invincible 3-1 lead in the ongoing tournament, faced criticisms for letting their vulnerable opponents, finally score decent without quick fall of wickets, unlike the last four Tests. READ: David Warner, Steven Smith lead Australia to 287 for 3 at stumps on first day of 5th Ashes Test at The Oval

According to a report from BBC, Wood said: “This is the Ashes and you’re representing your country. We’ve got that desire to win 4-1. With the overheads this morning, it was the right decision to bowl. I thought we bowled all right as a group. A couple of nicks didn’t carry, we just didn’t get the wickets, now we’ve got that second new ball round the corner.”

“If we could have got a couple more wickets in that last session I’d have said it was an even day. But you never know, if we get two or three early then we could grab that momentum back,” Wood, playing just his sixth Test match, added. READ: Michael Clarke, Kumar Sangakkara— Same day, two legends walk into field for their final test

Earlier, Australian opener David Warner who looked in brilliant touch on Day One at Oval scoring 85 recommended the visitors batted well and though the English bowling attack were fantastic throughout the series, they failed to stick to their “right lengths” at Oval. “For a lot of the time out there I felt like they bowled just a fraction too short. In every other game they’ve bowled fantastically, put it up there and allowed us to try and drive. We’ve been getting the odd one away and then the nicks are coming. I won’t speak on their behalf about their intensity but any time you’re playing a game for your country you’re always going to come out and give 100%. Today we batted well,” he added. READ: Ashes 2015: Clarke’s guard of honour by England receives praise from Warner 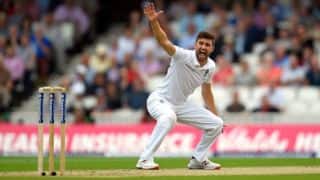