While England won the first and third Test, Australia won the second Test.

Trent Bridge: Australia captain Michael Clarke and England counterpart Alastair Cook have played more than 200 Tests between them but both are perplexed by the to-and-fro nature of this season’s Ashes series. England won the first Test in Cardiff by 169 runs only for Australia to bounce back with a mammoth 405-run victory in the second Test at Lord’s. Then England responded with an eight-wicket win inside three days in the third Test at Birmingham’s Edgbaston ground last week. As a result, England take a 2-1 lead into the fourth Test of a five-match series at Nottingham’s Trent Bridge ground starting on Thursday. READ: Who will replace James Anderson?

“I can’t explain that — it’s a roller-coaster ride,” Clarke told reporters on Wednesday. “We played some not so great cricket at Cardiff and Edgbaston and then, at Lord’s, we were outstanding. We have seen that from both teams. I don’t know the reason.” READ: England need to look beyond Adam Lyth before it is too late

Cook perhaps got closest to an explanation by observing how a team that had taken an early advantage in a match had retained a strong position until the end of the game. “When both sides got on top, they’ve been pretty ruthless at staying on top and not allowing the other side to come back,” Cook said. READ: Under-fire Michael Clarke needs expert help to battle himself out of danger

Cook, whose side will look to break a seven-Test streak of alternating wins and losses by recording their first back-to-back victories of 2015, added, “I’ve seen a shift from one side to the other side taking the lead, but I haven’t seen it shift back and forward in three games like this. Hopefully, that can stop.” READ: All is not well with Ian Bell despite two half-centuries in 3rd Test at Edgbaston

No side since Australia were inspired by batting great Don Bradman back in 1936-37 have come from 2-1 down to win the Ashes, with Bradman’s side 2-0 down at one stage. But Clarke said his team could record a landmark achievement of their own this Ashes. “We showed that at Lord’s,” he said. “We can take confidence that we bounced back after Cardiff… we’ve got to have the same attitude now.” 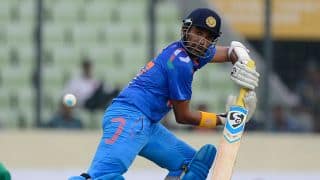 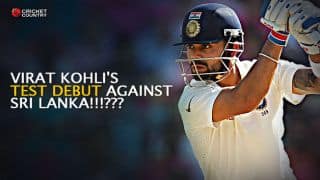 Virat Kohli to make debut against Sri Lanka in Tests