There were rumours that Michael Clarke refused to travel on the team bus or socialise with teammates.

Australia captain Michael Clarke angrily denied Monday claims that the disastrous England tour has been plagued by off-field dramas, saying it was “absolute garbage”. Clarke, 34, announced he was retiring after England completed a crushing innings and 78-run victory in the fourth Test at Trent Bridge on Saturday to take an unbeatable 3-1 lead in the five-match Ashes series. He will play the final Test at The Oval on August 20 before the curtain comes down on a distinguished career. READ: Michael Clarke: Telling my grandfather about my retirement was the hardest part

But his departure has been met by rumblings of off-field unrest in the Australian media, with the Sydney Daily Telegraph claiming there was a long-running feud between the wives of two senior players which caused distractions.

It also claimed Clarke refused to travel on the team bus or socialise with teammates, while the sacking of popular vice-captain Brad Haddin after time off for family reasons did not go down well. READ: Ricky Ponting backs Michael Clarke’s decision to retire after Ashes 2015

“There is no disharmony is this group whatsoever. The players are as tight as any team I’ve been a part of,” Clarke told Sydney radio station Triple M.  Travelling in different cars. What a load of shit. Wives and girlfriends being on tour is a distraction? What a load of shit. That’s absolute garbage. I’ll give back 10 of my Test 100s if it wasn’t for my beautiful wife.”

The newspaper had claimed it was “the year-long disintegration in the off-field relationship between Clarke and the rest of the team” that hindered any chance of Ashes success.

“He often chooses to travel by private car instead of the team bus and rarely attends team get-togethers. On the night that he made his decision to step down, team members were stunned when he joined them for a rare drink in the hotel bar, although he ended the night drowning his sorrows with former teammate Shane Warne rather than any of the current side.” READ: Ashes 2015: Darren Lehmann says Rod Marsh and him must shoulder lot of blame for Australia’s loss

Cricket Australia chief executive James Sutherland has vowed a full review of the tour, and Clarke said the players had to accept blame.

“At the end of the day the players are the ones who walk onto the field, we have to perform and we haven’t performed well enough,” he said.
In a column for the Sydney Daily Telegraph on Monday, Clarke revealed it was a tough decision to walk away from Test cricket. My entire life has been about cricket. I’ve thought about the great game every day for as long as I can remember,” he said.

“Definitely telling my grandfather was perhaps the hardest part and he was very emotional. Pop’s made it clear to me over the past 10 years that watching me play cricket is a big part of what keeps him going. I tried not to let emotion overcome me -– I’ve done too much crying over the years.”

Clarke, one of the best batsmen of his generation but plagued by injuries, knew the time was right to go, having reached 25 just six times in his last 30 Test innings. READ: James Anderson recalled to England squad for 5th Ashes 2015 Test at The Oval

He added that he was proud that “right up to the last day of my career I can look myself in the mirror and say that I have left nothing in the tank in terms of my work ethic and trying my best”. 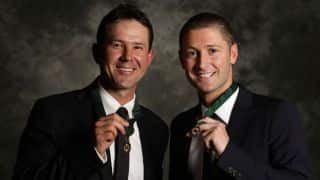 QUIZ: How well do you know Michael Clarke? Live Cricket Score India A vs Australia A, Triangular series 4th match at Chennai AUS A 262 for 7 in 48.3 overs chasing 259: Australia A win by three wickets, book spot in final