Michael Clarke said the way his side bounced back at the World Cup after their defeat by New Zealand should encourage them to do same in Ashes.

Cardiff: Australia captain Michael Clarke said the way his side bounced back at the World Cup after their defeat by New Zealand should encourage them following a crushing loss in the first Ashes Test. England beat Australia by 169 runs with more than a day to spare in Cardiff on Saturday to go 1-0 up in the five-match series. Australia, set a mammoth 412 for victory, were dismissed for 242 in their second innings just over an hour after tea on the fourth day at Sophia Gardens. Read: England thrash Australia by 169 runs in Ashes 2015 1st Test at Cardiff

England pace-man Stuart Broad did the bulk of the damage with a haul of three for 39 in 14 overs after man-of-the-match Joe Root had laid the foundations for victory with 134 in the hosts’ first innings 430. The last time Australia won an Ashes series after losing the first Test was on their 1997 tour of England. Read: Ashes 2015: England win key moments to outclass Australia in 1st Test at Cardiff

But Clarke’s proof of how things could turn around came from a more personal and recent example. In February, Australia were beaten in the pool phase of the World Cup by New Zealand only to thrash their fellow co-hosts weeks later in a one-sided final in Melbourne. However, Australia almost pulled off an improbable victory before losing to New Zealand by just one wicket in their World Cup pool encounter in Auckland, whereas their chances of winning in Cardiff had long since evaporated by the time England triumphed in the Welsh capital.

Got to be better

“We have been outplayed in this Test match,” said Clarke, bidding to lead Australia to their first Ashes series win in Britain in 14 years. “We’ve got to be better. It’s pretty simple,” added the star batsman, himself yet to enjoy an away Ashes campaign triumph after a trio of tour reverses in 2005, 2009 and 2013. Losing to New Zealand in the ICC Cricket World Cup 2015 gave us a bit of a kick up the backside, and (the team) will probably see this game very similarly,” explained Clarke. “This gives us a bit of a kick up the backside.” There was just one fifty in Australia’s first innings 308 in Cardiff, veteran opener Chris Rogers making 95. Read: Ashes 2015: Australia needs serious introspection after humiliating defeat to England in 1st Test at Cardiff

Several top-order batsmen, including Clarke himself, made 30s and the pattern was repeated in an Australia second innings where David Warner’s 52 and No 8 Mitchell Johnson’s 77 were the only significant scores. “I think the shot selection wasn’t as good as it needs to be,” Clarke said. “The fact that we all got starts, especially in our first innings, (indicates) we need to have more discipline there. “At least one, maybe two of those guys — me in particular — we need to go on and make a big score,” he said.

Australia whitewashed England 5-0 on home soil during the last Ashes clash in 2013/14 as their arch-rivals struggled to cope with the greater pace of pitches ‘Down Under’ which were exploited by home fast bowler Mitchell Johnson, who took 37 wickets in the series. By contrast, Australia’s batsmen could not come to terms conditions in Cardiff, undone by England’s accuracy on a slowish surface offering seam movement.

“We’ve got to find a way to combat the way England are bowling to us,” said Clarke. “They’ve got pretty set plans to each individual player,” he added of an England team who marked new Australian coach Trevor Bayliss’s first match in charge by making good use of the former New South Wales boss’s ‘inside knowledge’. Australia now head to Lord’s for the second Test starting on Thursday, with their last two Ashes matches at the ‘home of cricket’ having ended in thumping defeats by 115 and 347 runs in 2009 and 2013 respectively. “We need to improve in all three areas — and I look forward to Lord’s. We need to be at our best to beat England in these conditions — and in this case, we weren’t,” said Clarke. Read: The Ashes 2015: Where was the intensity at Cardiff? Ashes 2015: Joe Root feels he scored his most important hundred in Cardiff 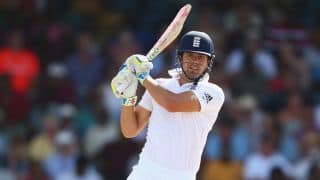