Australia are 2-1 down in the five-Test series and while Clarke has admitted that his poor form hampered team's performance.

Nottingham: Defiant and angry Australian captain Michael Clarke on Wednesday vowed to keep playing on after the Ashes series with England, with those suggesting he was finished talking “a complete load of rubbish”. Pressure has been building on Clarke, who has a meagre Ashes series total of 94 runs in six innings at an average of under 19, with Australian media Tuesday saying he looked “lost” and knew the end was near. But the 34-year-old, who has scored 28 Test centuries, said he was going nowhere, with the desire to play still burning strongly. “The criticisms of my game at the moment are deserved and I wouldn’t expect anything different, especially as the captain of the team,” he said in a column for Sydney’s Daily Telegraph.

He further added, “But I’ve heard there have been a few articles questioning me for not having that hunger inside me. I think somebody said they could ‘see it in my eyes’ that I was finished after this series. That’s a complete load of rubbish.” The Sydney Morning Herald‘s chief sports writer Andrew Webster said on Tuesday Clarke’s expression “with each cheap dismissal is undeniable: it is a blank expression of utter bewilderment. He isn’t annoyed but lost”.

Peter Lalor, cricket writer for The Australian, added to Clarke’s woes by saying that failure in the fourth Test in Nottingham starting Thursday “spells an almost certain end to his career” Clarke said, “People can certainly have a shot at me about my performance, but they can’t have a shot at me about my desire and my will to play this great game. To this day, I’m the first to training and the last to leave, so don’t tell me that I don’t have the desire and the hunger. I have no intention to walk away from cricket,” he said.

“Chris Rogers waited until 35 years of age to play his second Test. I’m 34 not 37 and I want to keep playing for Australia beyond this series, however I will be judged on performance like everyone else.” He added, “To question me on my hunger kills me, it absolutely kills me, because I pride myself on trying to get better every single day. After 13 years in this team I still think I can improve.”

Australia are 2-1 down in the five-Test series and while Clarke has admitted that his poor form meant the team had been “playing with 10 players”, he is confident his touch will soon return. “Under pressure is how I’ve stood up in the past and that’s the challenge I face now. I feel like the one time I got in this series, I declared in the second innings at Lord’s, and I need to have another innings like that where I get in.I just need to find a way through hard work, self-belief and a bit of luck to get to 30 and I think I’ll be in a much different place,” he said. 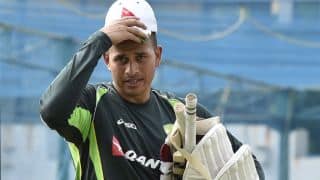