Chris Woakes is desperate to prove his worth as a batsman during England's Ashes tour of Australia in the absence of Ben Stokes.

London: Chris Woakes is desperate to prove his worth as a batsman during England‘s Ashes tour of Australia in the absence of fellow all-rounder Ben Stokes. Durham star Stokes did not fly out to Australia with the rest of the England squad on Saturday, having been suspended from international duty following an incident outside a Bristol nightclub in September. He remains under investigation after being arrested on suspicion of causing actual bodily harm, with Stokes and England still waiting to discover if he will face criminal charges. The England and Wales Cricket Board have not yet ruled the 26-year-old vice-captain Stokes, who has a broken finger, out of the series which starts with the first Test in Brisbane on November 23. Ashes 2017-18: Root desperate to go out and perform against AUS

But England captain Joe Root made it clear prior to the squad’s departure that they had to be prepared to be without Stokes for the entire five-Test series. That would leave a whole in an England middle-order where off-spinning all-rounder Moeen Ali and wicket-keeper Jonny Bairstow, as well as Stokes have often found themselves bailing the side out after repeated failures by the specialist batsmen.

But Woakes, who has nine first-class hundreds to his name, believes he can help make good on the runs England will lose if the big-hitting Stokes is unavailable. “Losing Ben as an all-rounder means myself, Moeen and I suppose even Jonny have more of a chance to prove our worth,” Woakes told reporters at Lord’s. “If I am to bat higher up the order, I will try to embrace that challenge and look forward to the opportunity to get in and score some big runs,” added the Warwickshire paceman, whose 18-match Test career was interrupted earlier this season by a side injury.

“I take my batting as seriously as possible. I know I have been batting at nine in recent Test matches but whenever I have played for Warwickshire I have obviously batted a lot higher than that. I have always tried to maintain a mindset of a batsman, something I have worked on for a good few years now, originally with Graham Gooch and more recently with Mark Ramprakash, to not just to be a guy who contributes down the order.”

If India, where Woakes was a member of a squad that lost 4-0 a year ago, is one of the most challenging of all England tours, an Ashes series in Australia remains arguably the most prestigious. And for the 28-year-old Woakes a maiden Ashes adventure represents the “pinnacle” of his career. “The rivalry speaks for itself whereas the conditions aren’t that much different to England, but in India they are,” he said.

“You face more spin on turning pitches which is something you’re not used to, but in Australia you face more fast bowling and generally the only real difference is less seam movement and more bounce. For an England cricketer going to Australia, in my eyes, is the pinnacle. There is such rivalry and such history and tradition, it is a great series to be a part of,” Woakes added. 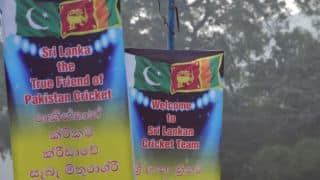