Australian pacer Mitchell Starc has been cleared of any serious injury, but he still remains doubtful for the fourth Ashes Test.

Australian pacer Mitchell Starc has been cleared of any serious injury, but he still remains doubtful for the fourth Ashes Test against England, beginning at the Melbourne Cricket Ground (MCG) on the Boxing Day.

The 27-year-old returned home on crutches after bowling with a bruised heel on Day Four and Five of the WACA Test, which Australia went on to win by an innings and 41 runs to take an unassailable 3-0 lead in the Ashes series.

Also, he recently spent a day with his foot in an ice bucket as he bid to become completely fit for Boxing Day Test, news.com.au reported.

However, Starc had undergone a scan in Sydney that confirmed that he had no major damage but heel on his front right landing foot is badly bruised.

As the reserve fast bowler in the squad, Jackson Bird is the most likely replacement if Starc fails to recover in time for Boxing Day.

The fast bowler has been performing at his menacing best in the recent times, having grabbed 19 wickets in three matches to become the top wicket-taker in the ongoing Ashes series. 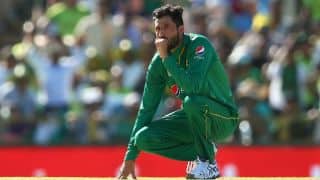