The Ashes 2017-18 opener is not even a month away. The first Test begins at The Gabba, Brisbane from November 23. While Australian media expects a whitewash from hosts, England‘s middle-order batsman James Vince hopes for a career revival with good performances. He also added that England are looking up to the challenge of facing Australian pacers. There are no official reports of Ben Stokes’ availability following his Bristol street-brawl, but Vince hopes they will get his service somewhere in between.

Mitchell Starc produced career-best figures for New South Wales (NSW) against South Australia. With figures of 8 for 73, he has certainly made the right noise ahead of Ashes. Will he repeat his mentor Mitchell Johnson’s previous heroics at home?

‘Not daunting but a great challenge’

“I wouldn’t say it’s daunting. It’s a great challenge. It’s a great chance for guys to step up and make a name for themselves. I think the key is getting those guys (Starc, Josh Hazlewood and Pat Cummins) into their third and fourth spells. Trying to get through the tough periods. And when we can, put pressure on the bowlers and try to put them on the back foot.”

“Cummins is being talked about a bit – he hasn’t got a huge amount of experience. I’m sure (the Australian bowling attack) are going to be under pressure as well. It’s just about who’s going to put in the best performances on the day.”

“He’s had a tough few weeks I would have imagined,” he said. “If he does come out here at some point that would be great for us, and him. But for the time being, we’ll get on without him.” 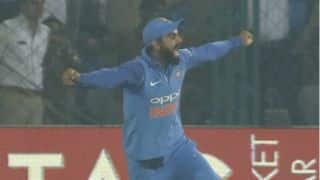