Ashes 2017-18: Adam Gilchrist has backed Aussie pacer Pat Cummins to make a difference in the series.

With barely over a month to go for the Ashes, the road to preparations for the series is already on in full swing. Meanwhile, legendary Australian Adam Gilchrist has backed Aussie pacer Pat Cummins to make a difference. He feels Cummins’s age, pace and energy are all in his favour as he could prove to be a deadly weapon for the Aussies. Cummins had suffered quite a few injuries in the recent past, but has managed to pull off a speedy recovery, as he also made a good impact in the Test series against India in February 2017. Having come up with consistent performance, he is now all set to make his Ashes debut, which gets underway from November 23 at The Gabba in Brisbane. Hazlewood struggling for fitness ahead of Ashes 2017-18

“When Starc is hot, he is unplayable. He is world class, as is the ever reliable Hazlewood. But Cummins I think can be the difference with his pace and his energy. He has been so impressive this year. The English were terrorised by Johnson last time they were out here. If those boys get it right it will be a pretty formidable attack again,” Glichrist was reported as saying by AAP.

“On those difficult tours of India and Bangladesh, one of the shining lights was Cummins’s energy and effort. The fact that he has strung together all those Tests this year, no one would be more relieved than him. He’s got confidence in his body now and he will be well managed. I can’t wait to see what he can do,” he added.

Speaking on who could be the ideal wicketkeeper in the series, he promptly said, “Whoever they pick, stick with them for a while, try and get some stability there. It is up to the player to warrant selection but if the selectors give them a decent run it could really launch a career. There is so much cricket between now and the first Test, whoever gets it done in those Shield games will probably get the opportunity.” 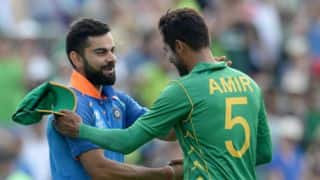