England bowling coach Chris Silverwood has urged fans to not be too harsh about Jofra Archer’s lukewarm performance in the fourth Ashes Test in Manchester. Archer, who set the series on fire in the second and third Test bowling quick, at times, managing to bowl consistently over 245 km/h, slowed down a bit in Manchester and went wicketless in Australia’s first session.

But Silverwood has reminder people that the fast bowler is only into his third Test and expecting him to keep bowling over 90 mph is unfair and impractical.

“I think we’re just going to be careful with Jofra,” Silverwood told Sky Sports. “He’s playing his third Test match, so we’ve got to cut him a little bit of slack. He’s still finding his way into international cricket. He’s figuring out what it’s all about.

“Test cricket is hard work. You must put the workload in, but it’s there, and he’s trying and we’ve seen what he’s capable of. But he’s not going to do it every day.”

Archer, omitted from the first Test in Edgbaston, made his debut in the second Test at Lord’s and immediately made an impact when he hit an in-from Steve Smith, resulting in the former Australia captain sustaining an concussion and missing the third Test, where Archer grabbed a six-wicket-haul as England bounced back to level the series 1-1.

However, at the old Trafford, Archer’s speeds dipped. Even his run-up to the crease was noticeably slower than usual. Silverwood touched upon the topic, adding that Archer would only learn from such unusual off days.

“The one thing that we see, sat on the side when he’s running in, he gets his knees pumping and he really attacks the crease,” Silverwood said. “But again, it’s part of his learning process, he is figuring out what he can and can’t do in Test cricket at the moment. And it’s his third game.

“The exciting thing is we know he can hit 90-plus miles an hour but, saying that, I didn’t bowl fast every day either, even though I tried. Sometimes it just doesn’t click.”

That Archer wasn’t having the best of games also has to do with Steve Smith’s rich vein of form. The batsman scored his third three-figure score of the series en route to registering his third Test double century. Smith has already crossed 500 runs in the series and with three more innings remaining, he is capable of doing things unheard of.
.
We’ve tried a few [plans], to be honest,” he said. “Everything we’ve thrown at him, he seems to have come up with an answer. But he’s just very good. I mean, it’s great to watch him, though preferably not against us. We’ve gone from Plan A to Plan B to Plan C, and he seems to figure out a way, which is probably where the genius lies within him.”

Australia could have seen Smith’s back had Jack Leach not overstepped, while delivering a ball that claimed the batsman’s wicket. At that stage, Smith was batting on 118.

“You don’t want anybody to bowl no-balls, it’s hard enough to get Steve Smith out anywhere without obviously this happening,” said Silverwood. “But there’ll be nobody more disappointed with Jack about that. And I’m sure he will work very hard not to let that happen again.

“It can take the wind out of your sails, to be honest, as a group and as a team,” he added. “But at the same time, you’ve got to get over it because these things happen. We’ve got to put that behind us now and move on.” 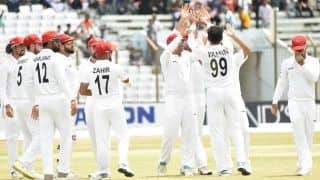