Australia captain Tim Paine declared his side’s first innings on a commanding total of 497/8 on the second day of the fourth Test against England at Old Trafford on Thursday.

Steve Smith, who missed England’s dramatic one-wicket win in the third Test at Headingley with concussion, top-scored with 211 while Mitchell Starc hit a blistering 54 not out in his first match of the series.

Smith, the world’s top-ranked Test batsman, has now scored 589 runs in four innings this series – his first since completing a 12-month ball-tampering ban – including three hundreds, at a colossal average of 147.25.

He was eventually out for 211, when a reverse sweep off England captain and occasional spinner Joe Root’s leg-break was caught by Joe Denly at what had been backward point.

Smith missed England’s series-levelling one-wicket win in the third Test at Headingley with a concussion suffered when struck by a Jofra Archer bouncer during the drawn second Test at Lord’s.

This was the third time this Ashes he had reached three figures following scores of 144 and 142 in the first Test at Edgbaston, with his lowest total of the series the 92 he made at Lord’s.

The 30-year-old former Australia captain was, however, dropped on 65 on Thursday when Jofra Archer failed to hold a caught and bowled chance off a hard-hit full toss.

Smith was also reprieved on 118 when caught at slip off Jack Leach only for replays to reveal that the left-arm spinner had bowled just the eighth no-ball of his first-class career.

Victory in Manchester would see holders Australia retain the Ashes at 2-1 up with one to play in a five-match series. 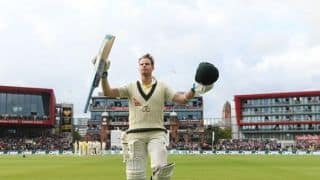