Ian Chappell believes the manner of Australian win in the first Ashes Test could set the tone for the rest of the series.

Ian Chappell believes the manner in which Australia gained the upperhand that culminated in a big win in the first Ashes Test could set the tone for the rest of the series.

After conceding a significant first-innings lead, Australia bounced back to crush England by 251 runs at Edgbaston, taking a 1-0 lead in the five-match rubber.

READ: I’ve got nothing to lose and a lot to gain – Leach

“I can see a five-nil coming up here,” Chappell told Australia’s Channel 9. “I said before the series that I thought if England lost the first Test they could crumble very quickly, we saw them crumble out here and we ve seen it happen a couple of times I could see it happening again.”

Australia made a surprise selection call for the first Test, leaving out premier pacers Mitchell Starc and Josh Hazlewood. Their places were taken by James Pattinson and Peter Siddle.

Chappell though says he would have gone with Starc. “I would have had Starc in for the first Test,” he said.

He praised Siddle’s performance and felt that snubbing a ‘quicker’ Hazlewood shows the ruthlessness of the Australia selectors. “He s (Hazlewood) a very accurate bowler, bit quicker than Siddle. It was a gutsy move, and this is the thing about Australian selection, Australian selectors historically are much more ruthless than any other team.”

Smith proved to be England’s nightmare in Birmingham as he scored two centuries on return to Test cricket. They have made changes for the second Test which gets underway at Lord’s from August 14.

Jack Leach has been called-up in a 12-man squad to exploit Smith’s perceived weakness against left-arm spinners. But Chappell, who played 75 Tests and 16 ODIs, feels Leach isn’t going to fare any better than Moeen Ali who was dropped after an ordinary performance.

“What other team would leave out Starc and Hazlewood? England should have been more ruthless with their second Test selection. Leach I don t think is going to be much better than Ali, in fact if I was an England selector, as much as it would pain me to do it, I d go without a spinner. I’d play Curran and Jofra Archer, but their selectors are not ruthless as are none of the other countries apart from Australia,” he said. 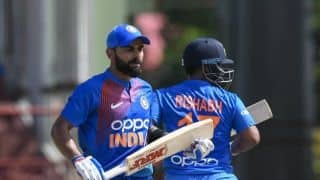