England were reduced to 201-6 at tea after the second Ashes Test at Lord's finally started Thursday.

Australia‘s Josh Hazlewood marked his entry into this season’s Ashes with three wickets as England were reduced to 201-6 at tea after the second Ashes Test at the Lord s Cricket Ground finally started Thursday.

England were in dire straits at 138-6 before Jonny Bairstow (36 not out) and Chris Woakes (25 not out) repaired some of the damage in an unbroken seventh-wicket stand of 63.

Fast bowler Hazlewood, the only change to the Australia side that beat England by 251 runs in the first Test at Edgbaston last week, backed up that decision in just the second over of the match by removing opener Jason Roy for a duck.

He then dismissed England captain Joe Root (14) to leave the hosts reeling at 26-2. Rory Burns, following up his maiden Test hundred at Edgbaston, made 53 after twice being dropped off Peter Siddle, and the left-handed opener shared a third-wicket partnership of 66 with Joe Denly (30).

But Denly’s exit after lunch sparked a collapse that saw England lose four wickets for 46 runs.

Hazlewood, in for fellow paceman James Pattinson, struck with his third ball when Roy was caught behind by wicketkeeper Paine after fending loosely outside off stump at a rising delivery.

It was a brilliant start for Ashes-holders Australia, looking to win their first Test series away to England in 18 years, with the hosts a wicket down without a run on the board.

But Hazlewood had Root lbw to a ball that nipped back. Burns, on 16, saw Usman Khawaja drop a routine gully chance from an edged drive off Siddle.

At lunch, England were 76-2 with Burns 34 not out and Denly 27 not out. But although the sunny conditions appeared good for batting, wickets tumbled early in the second session.

Denly, shaken up by a couple of short balls from fast bowler Cummins, was caught behind off Hazlewood.

But Paine then dropped a low left-handed chance off Siddle to give Burns, now on 47, another reprieve

Burns completed an admirable 119-ball fifty including seven fours but was out when Cameron Bancroft held a brilliant one-handed catch diving to his left at short leg off Cummins.

Siddle eventually got the wicket he deserved when Jos Buttler (12) played down the wrong line and edged to Paine.

And when Ben Stokes (13), having swept Nathan Lyon for four, missed with an attempted repeat and was lbw to the off-spinner, England were 138-6.

There were the now familiar boos when Steve Smith, fresh from scoring two hundreds in his comeback Test at Edgbaston following a 12-month ball-tampering ban that cost him the Australia captaincy, came on to bowl.

These turned to cheers when the leg-spinner failed to overturn an lbw decision after Bairstow was given not out by umpire Chris Gaffaney.

Thursday saw Lord’s turn red in support of the Ruth Strauss Foundation — a lung cancer charity set up to honour the late wife of Andrew Strauss, the former England captain, who died from the disease. 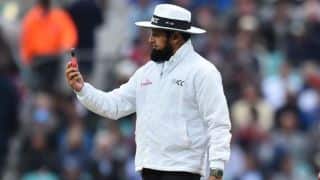 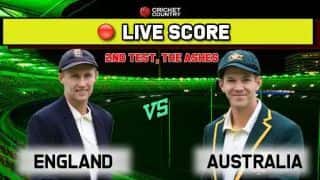