England extended their lead over Australia to 157 runs by lunch on the third day of the fifth Ashes Test on Saturday as they chase a series-levelling victory at the Oval.

Joe Denly was unbeaten on 37 and Ben Stokes had yet to get off the mark as the home side seek to put themselves in a match-winning position.

World Cup winners England are desperate to tie the series at 2-2 even though Australia have already retained the Ashes urn.

The tourists are equally hungry to wrap up their first series win in England since 2001 after edging ahead by winning last week’s fourth Test at Old Trafford.

Jofra Archer put England in pole position on Friday, taking six wickets to bowl Australia out for 225, giving the home side a first-innings lead of 69. Steve Smith top-scored with 80 to take his tally for the series to 751 runs in just six innings.

Denly drove Pat Cummins through mid-off for four in the first over on Saturday as England started brightly on a pitch that looked increasingly benign.

Lyon was brought on early and took some punishment in his first over as Denly hit him for a four and a six down the ground in consecutive balls.

But the off-spinner got some luck in his third over when Burns bottom-edged a short ball outside off-stump, with wicketkeeper Tim Paine taking the catch.

The opening stand of 54 was the highest of the series for either side. Root also fell in tame fashion, edging Lyon to Smith at slip for 21 to leave England 87-2 in the 28th over.

Marcus Harris did not take the field for Australia after he split the webbing in his left hand dropping Denly late on Friday. He required stitches but is expected to bat. 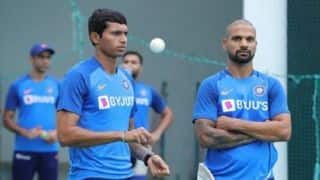