At stumps on Day 1 of the first Ashes Test, England were 10 for no loss and were still 274 runs behind Australia, who managed to score 284 following Steve Smith's hundred on Test return.

Along with the winners, Lara also predicted that England skipper Joe Root will end up as the leading run-scorer by the end of the five-Test series while Chris Woakes will be the leading wicket-taker.

“My predictions for the Ashes 2019, winners: England; most runs: Joe Root; most wickets: Chris Woakes,” he tweeted on Thursday.

On Thursday, Steve Smith showed the world what they missed in the last one year with a sensational hundred to singlehandedly drag Australia out of a hole and help them post 284 before being bowled out in the fag end of the opening day of the first Ashes Test at the Edgbaston Cricket Ground on Thursday.

After Australia were reduced to 122/8 before tea with Smith at the crease waging a lone battle, the former captain, who returned to action recently after serving a one year ban due to his involvement in the ball tampering scandal in South Africa, struck 144 off 219 balls, his majestic knock laced with 16 fours and two sixes.

Smith first shared a 88-run ninth wicket stand with Peter Siddle who scored 44 off 85 balls, and then stitched together a 75-run partnership for the last wicket with Nathan Lyon (12 not out) to take the Aussies to a fighting first innings score.

For England, Stuart Broad grabbed 5/86 while Chris Woakes returned figures of 3/58 in the absence of pace spearhead James Anderson who got injured after bowling just four overs.

At stumps, England were 10/0 after two overs with openers Rory Burns (4) and Jason Roy (6) at the crease. 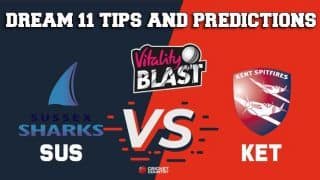