England's Test jersey was revealed on Monday with Joe Root sporting the number 66.

In a first, England‘s Test cricketers for the Ashes 2019 series starting next month will have their names and numbers printed on the back of their white jerseys.

As the inaugural ICC Test Championship begins with the first Ashes Test at Edgbaston on August 1, so too will a new type of jersey be unveiled for the 71st Ashes series.

On Monday, the England & Wales Cricket Board released the first look of England’s Ashes Test jersey with skipper Joe Root wearing his name and the number 66 on the back of his jersey.

Names and numbers on the back of Test shirts! ???pic.twitter.com/M660T2EI4Z

The Ashes start at Edgbaston on August 1 followed by a week’s break before the second match at Lord’s. The series will then shift to Leeds the northernmost venue of the contest for the third Test at Headingley, and then to Old Trafford for the fourth Test and finally at The Oval for the last fixture.

Test cricket’s most historic contest dates back to the late 19th century, and the upcoming five-match series holds plenty of significance for both teams. England are coming off their first Cricket World Cup title ever and hope to regain the Ashes, while Australia will hope to continue their upswing after a tumultuous 18 months. 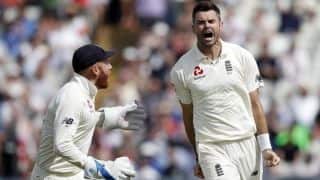