Wood will be out for up to six weeks after suffering a side strain during last Sunday's historic World Cup final victory over New Zealand.

England paceman Mark Wood has set his sights on recovering from injury in time to play a role in the Ashes against Australia.

Wood will be out for up to six weeks after suffering a side strain during last Sunday’s historic World Cup final victory over New Zealand.

The 29-year-old won’t play in next week’s one-off Test against Ireland at Lord’s or the first Test against Australia when the Ashes get under way at Edgbaston on August 1.

But Durham star Wood still hopes he can get back to full fitness in time for the last two Tests in the five-match series.

“I might make the last couple (of Tests). It all depends on selection,” Wood told BBC 5 Live’s Sportsweek on Sunday.

“Hopefully the injury will have healed by then and I’ll be back with the speed and will have played a few games for Durham.

“My side injury is four to six weeks, so hopefully I’ll still play a part towards the end of the season, but if not it’s been a fantastic summer so far for English cricket.

“There’s still plenty more to go and hopefully for me there’s still a bit more cricket to play.”

Wood played a key role throughout the World Cup, but was clearly in pain as he strived to maintain his bowling speed during his 10 overs in the final against New Zealand.

He said he was still pinching himself after England’s heroics at Lord’s. “To be honest, it’s so hard to believe,” he added.

“You’d think by now it would have sunk in but to be world champions, it still gives me goose bumps listening back to it and watching it.

“I’m still feeling on top of the world. I know I might have an injury, but I didn’t look past the World Cup initially.

“I know the Ashes is round the corner but I’m over the moon that I’ve got the dream of the World Cup.” 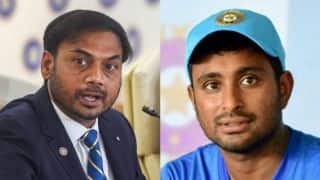