Ashes 2019: 'He's got a bit in the bank' - Struggling Jonny Bairstow gets Test lifeline from Trevor Bayliss

Ashes 2019: 'He's got a bit in the bank' - Struggling Jonny Bairstow gets Test lifeline from Trevor Baylis

England's coach also defended Jason Roy, saying it would be harsh to judge him.

England coach Trevor Bayliss has thrown his weight behind struggling Test wicketkeeper-batsman Jonny Bairstow, whose lack of runs in the format have prompted speculation over his role as the preferred gloveman.

After a very fine World Cup run as opener, Bairstow has managed 14 runs in four Test innings. He bagged a pair in the four-day Test match against Ireland and Lord’s last month, and scored 8 and 6 in the 251-run loss to Australia as the Ashes began on August 1 at Edgbaston.

This poor run of form has dropped his Test batting average to 22.91 over the past 12 months, which is significantly lower than Bairstow’s career average of 35.70. In his last 17 Test innings, Bairstow has six ducks and three scores of 50-plus.

Asked about whether England are considering dropping Bairstow for the second Ashes Test at Lord’s next week, Bayliss said: “I wouldn’t have thought so. He’s got a bit in the bank, Jonny.

Bayliss also backed Test rookie Jason Roy, who scored 10 and 28 at Edgbaston. The 28-year-old was called up to England’s Test squad for the four-day match against Ireland at Lord’s last month, having scored 443 runs at an average of 63.28 and strike-rate of 115.36 during the team’s historic World Cup run. He made 5 and 72 in England’s win over Ireland, and was then included for the Ashes.

On day five of the Edgbaston Test, Roy was bowled when charging down the track at Australia offspinner Nathan Lyon.

“I thought he was trying throughout both innings to knuckle down and play in a Test match mode. But if he gets out like he did he’s got to take it on the chin, we’ve got to take it on the chin,” Bayliss said. “If you’ve been applauding him for playing those kind of shots elsewhere it’s a bit hard to be too critical if he gets out playing that way.” 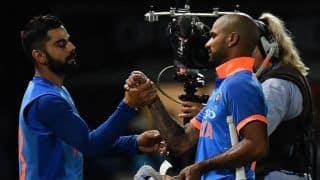 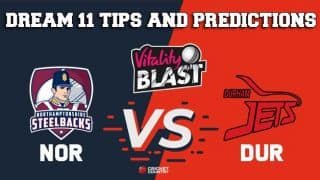