Archer said that the conditions in Leeds dictated why he bowled fewer short balls than at Lord's.

Jofra Archer insisted his six-wicket haul on the opening day of the third Ashes Test at Headingley proved there was more to his game than raw pace alone.

The build-up to this match had featured plenty of talk about the physical threat posed by England fast bowler Archer, who by hitting Steve Smith with a 92 mph bouncer in the drawn second Test at Lord’s had ruled the star Australia batsman out of the Headingley match with concussion.

But Archer deployed his fearsome short-ball sparingly during a superb return of six for 45 in 17.1 overs as Australia, 1-0 up in the five-match series, were dismissed for just 179 after England captain Joe Root won the toss in overcast conditions on his Yorkshire home ground.

“I don’t need to run in and bowl 90 mph every spell to get wickets,” said Archer. “I’ve shown that today. There will be times in Test matches you have to focus on hitting your length. There will be times to ramp it up as well but you don’t have to go into it every innings.”

Archer, the 24-year-old Barbados-born son of an English father, said conditions in Leeds dictated why he bowled fewer short balls than at Lord’s.

“I bowled a few, obviously to let the batter know they are still there but this wasn’t a short-ball wicket, it wasn’t as hard as Lord’s. So it’s just get it on the full line and length and it got results today.”

Archer arrived at Headingley rather closer to the toss than England would have liked but their new spearhead, who came into the side after James Anderson broke down with a calf injury early during Australia’s 251-run win in the series opener at Edgbaston, is a cool customer.

“Actually I was early but there was a one-way street so I ended having to park in the car park behind the rugby field,” Archer said.

“I’m pretty relaxed. I actually don’t think I need to bowl in the warm-up at all. I bowl a few balls before we go out and that’s enough for me.”

Australia did manage one substantial stand in an innings that was finished inside 53 overs, with David Warner (61) and Marnus Labuschagne (74) putting on 111 for the third wicket.

Labuschange’s innings was his second straight half-century after making 59 as Smith’s concussion replacement, the first in Test history, in the second innings at Lord’s.

Archer, however, swung the match back England’s by having Warner caught behind off a 90 mph delivery. It was the start of a collapse that saw Australia lose their last eight wickets for 43 runs.

“That’s incredible Test bowling,” said Warner. “It’s a bit like how (South Africa great) Dale Steyn with the new ball tried to just use the conditions and then sort of ramp it up when they need to. That was world-class bowling at its best.”

This was Warner’s first double-figure score of the series after just 18 runs in four previous innings.

“Today was about trying to negate that good ball and not get out to it,” said Warner in what his and Smith’s first Test series since they completed their 12-month bans for a ball-tampering scandal in South Africa.

“I had a lot of luck, I played and missed quite a lot but I kept my bat nice and tight,” added Warner, who also praised Labuschagne’s “outstanding discipline”.

Meanwhile, Archer said Warner’s references to Steyn and former Australia fast bowler Mitchell Starc were “really flattering” even if his fast bowling heroes as a child were Caribbean greats. 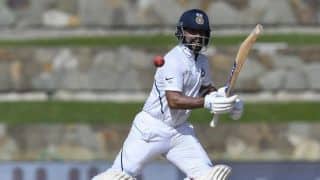