Jofra Archer has said his hostile spell to Steve Smith was meant to rattle him and that it's never pleasant seeing someone get hurt and consequently miss playing.

England pacer Jofra Archer has said his hostile spell to Steve Smith was to meant to rattle the Australian and that it’s never pleasant seeing someone get hurt and consequently miss playing.

Smith, batting on 80, was hit on the neck by a searing Archer bouncer. The well-set batsman took off his helmet was laying on the ground looking in considerable pain.

Few England fielders and non-striker Pat Cummins rushed forward to attend him before Australia doctor convinced Smith to go off the field as a precautionary measure.

“I was saying to the guys yesterday I don’t think I have ever seen him get out of his own accord! I just tried to get him rattled. I just wanted to get him out,” Archer told Sky Sports after day four’s play on Saturday.

When quizzed about his thoughts on seeing Smith lying on the ground after the sickening blow, Archer replied, “I don’t know what I was thinking at the time. You don’t ever want to see [someone get hurt] or missing a day or another game, especially after what happened a few years ago [Phillip Hughes]. It’s never a nice sight.”

Smith returned to bat later on and was eventually dismissed on 92.

Archer continued to impress on debut, delivering 29 overs in which he took 2/59 including the wickets of Cameron Bancroft and Tim Paine.

The 24-year-old said bowling such a long spell felt natural to him as he’s used to it in county cricket. “First-class cricket isn’t really shown on TV so people wouldn’t have seen what I was like. I usually get to 40 or 50 overs a game so it felt kind of natural. I am familiar with Lord’s so that has also helped me,” he said.

Former England captain Nasser Hussain was all praise for Archer. “Look after him [Archer], because this lad is an absolute gem. I’m going to say a big comment here, but if Archer didn’t play in this series, England could not win the Ashes,” he said. 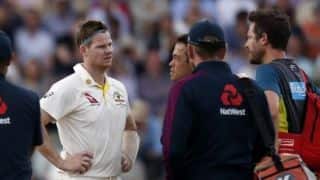