Despite England recovering well, Ponting feels with the second new-ball, Australia can turn things around in a jiffy.

Former captain Ricky Ponting was left impressed with England‘s batting on the second innings but maintained Australia have a total which is defendable after all. Australia set England a fourth-innings target of 359, in response to which England ended the third day with a score of 156 for 3.

Josh Hazlewood and Pat Cummins landed early blows to leave England at 15/2, and a first-innings repeat looked imminent before Joe Root and Joe Denly added 125 runs for the fourth wicket. Denly was dismissed immediately after his half-century while Root continued to bat on, his score reaching 75 at stumps.

Despite England recovering well, Ponting feels with the second new-ball, Australia can turn things around in a jiffy.

READ: What the hell is going on with this England team? Boycott fumes

“I know England have played really well this afternoon, they dug deep,” Ponting told cricket.com.au. “Denly and Root’s partnership was outstanding, but I think Australia has still got plenty of runs. We’ve seen (Josh) Hazlewood (2-35) and (Pat) Cummins (1-33) bowl outstandingly well right through the game and I think as the game goes on Nathan Lyon (0-42) is going to come in to it more and more.

“The wicket looks like it’s flattened out considerably late this afternoon but there’s a new ball around the corner tomorrow morning. It’s been a new-ball wicket all game. The other thing we’ve seen is in the game it has been a really hard wicket for anyone to come in and start on.”

Australia, in their second innings, were bowled out for 246 with Marnus Labuschagne top scoring with 80. Although it’s a steep target for a side batting last, Ponting felt the Headingley surface is good for batting and that Australia should have tried getting few more on the board.

“Even when Australia got to (a lead of) 359, it was not like it was a 359 on a fifth-day pitch,” Ponting said. “It was a 359 on a wicket that’s probably at its absolute best to bat on. The Aussies were wary of that this morning. I spoke to a few of them early on this morning, they understood they had to get as many runs as they could.

Root and Denly’s partnership was one which England desperately needed. Questions were being raised of the home team after they were lacerated by Australia for 67 in the first innings. In the absence of their chief tormentor Steve Smith, this is England’s strongest chance to level the series and Ponting foresaw the improvement arriving soon.

“I said to Justin (Langer, Australia coach) this morning I expected this would happen,” he said. “If it didn’t happen today for England it’s series over, it’s not going to happen. “To be fair, Denly has looked quite good through the series.

“Both Denly and Root have had a fair bit of luck today; a lot of balls have gone past the outside edge, a few lbw shouts have been very close, but anyone who’s got runs on this wicket has had to have their fair share of luck. They’ve dug deep, they’ve played well and kept themselves in the game.”

The half-century Root’s second of the Ashes 2019, his 57 at Edgbaston unable to prevent a heavy Australia win and Ponting had nothing but good words for the England skipper, who’s been batting at No. 3 in the series.

“Joe Root’s played beautifully and that’s what you expect from your captain in situations like this. In an Ashes series when your backs are to the wall, you need your captain to stand up and he’s done it today,” Ponting said. 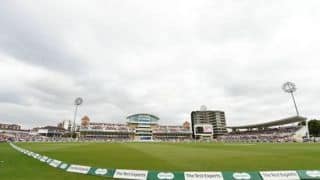