Another loss will likely see the urn on its way Down Under, but Root feels England will muster the right response.

England captain Joe Root expects the hosts to bounce back in the second Ashes 2019 Test at Lord s that begins on Wednesday. England were thrashed by 251 runs in what was a historic defeat at Edgbaston in the five-match series opener.

Another loss will likely see the urn on its way Down Under, but Root feels England will muster the right response. Last week will have hurt everyone. Everyone will be absolutely desperate to go and win this week and I expect nothing less, he said.

We really back ourselves to perform and to come back strong. We ve proven that we do that time and time again when we when we ve been defeated, especially at home. And I m expecting a big response from the boys.

England are certain to make two changes Jofra Archer is set to make his maiden Test bow replacing the injured James Anderson and other being at least one of two left-arm options spinner Jack Leach and swing bowler Sam Curran.

Root lavished praise on Curran, who has won all six of his Tests on home soil and has impressed at the highest level. Sam s a brilliant talent, he s got the ability to change the game with both bat and ball, similar to Ben Stokes, said Root.

His record is fantastic. He has had a huge impact in most of the games he s played and is a very promising talent. I m sure will play a huge amount of Test cricket.

Elaborating on Archer, who gave a confident reply to the media on Monday, Root can t wait to see the 24-year-old unleash himself at Lord s. Yes especially having heard his press conference yesterday. He s certainly very confident and that s great to see in a young guy. It s as he should be off the back of a brilliant World Cup.

We re very excited to see him at the start of a journey. Things don t seem to faze him. So, I think if anything, it ll motivate him. When he gets his chance, he ll be desperate to prove to everyone how good he says he is.

England have been victorious on their previous trip to Lord s last month during the one-off Test against Ireland, but Root was critical of the pitch. This time he has a simple response when asked what he expected. I m expecting it to be better, he said.

I m sure they ve worked extremely hard to prepare a brilliant wicket this time around. And hopefully there s a bit there for everyone. 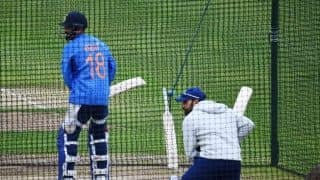