Root averages 48 at number four in the order but a shade over 40 when batting at number three.

England batsman Joe Denly confirmed Tuesday he will drop to No. 4 for the opening Ashes 2019 Test against Australia, with captain Joe Root replacing him at number three in the order.

Root has previously made clear he prefers batting at four, but the Yorkshireman is understood to have approached England coach Trevor Bayliss after last week’s Test win over Ireland about returning to his old position of first-wicket down when the Ashes opener starts at Edgbaston on Thursday.

Although England beat Ireland by skittling out the visitors for 38 in their second innings at Lord’s, they only managed 85 all out themselves in their first innings. (ALSO READ: Langer expects hostile receptions for returning Cameron Bancroft)

Bayliss has long wanted Root, England’s best batsman, to bat at No. 3 following a succession of top-order collapses that have seen the skipper walking out to bat at four when two cheap wickets have fallen.

Root averages 48 at number four in the order but a shade over 40 when batting at number three.

But with England openers Jason Roy and Rory Burns having played just eight Tests between them, the logic in having 81-Test veteran Root bat at number three is clear. Denly, speaking at Edgbaston on Tuesday, said: “Joe Root will bat at three and I’ll be batting at four. (ALSO READ: Warner fit for Edgbaston Test)

“He rang me the other day and told me he wanted to bat three and for me to go in at four. I think Rooty just wanted to get involved in the game, get up there and get out in the middle.

“I’m very excited. I wasn’t too fussed where I’d be batting, it’s just great to be in the eleven. I’ve batted at four before for Kent and throughout my career, so it really wasn’t a big issue.” 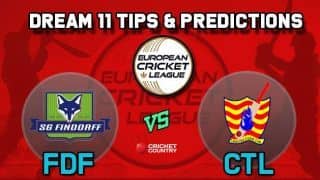