England were bowled out for 258 on day two of the second Ashes Test at Lord's.

In his first innings in Test cricket, debutant Jofra Archer faced a series of short-pitched deliveries from Australia’s pace attack on day two of the second Ashes Test at Lord’s, and his team-mate Rory Burns expects the fast bowler to return the favour in kind.

Archer scored 12 in his debut innings in Tests before he fending a leading edge off Pat Cummins to gully, as England were bowled out for 258 on Thursday, the first full day of cricket at Lord’s after day one was washed out.

The Barbados-born quick has been viewed as a big source of wickets for England – who are down 0-1 in the Ashes – as they seek to counter Steve Smith and level the five-match series. And Burns, who top-scored with 53 on Thursday, believed Archer was going to test the Australian batsmen.

“Archer copped a fair few short balls so he’s probably looking forward to getting his own back,” he said after stumps. “It’s quite an obvious tactic. The boys are preparing for it and luckily we can dish out some of our own in this game as well.

“We’ve got some boys in our armoury who do the same thing so it should be pretty interesting. We’re not surprised by the tactic of short balls. I’ve obviously batted a few balls so far in this Test series and they are looking for different ways to get me out.

“I think Nathan Lyon ran past me this morning and mentioned it within about three balls so I was well versed and prepared for what I was getting. It’s just a good battle, isn’t it?”

“I think it’s tight, isn’t it?,” said Burns. “It’s a competitive total, we’d obviously have liked more runs if we could have eked them out but I think the seamers kept everyone interested all day. It’s poised quite nicely. I think it’s game on and we’re right in amongst it.” 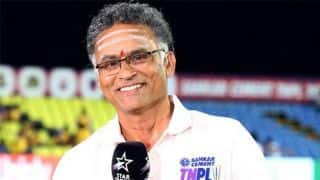